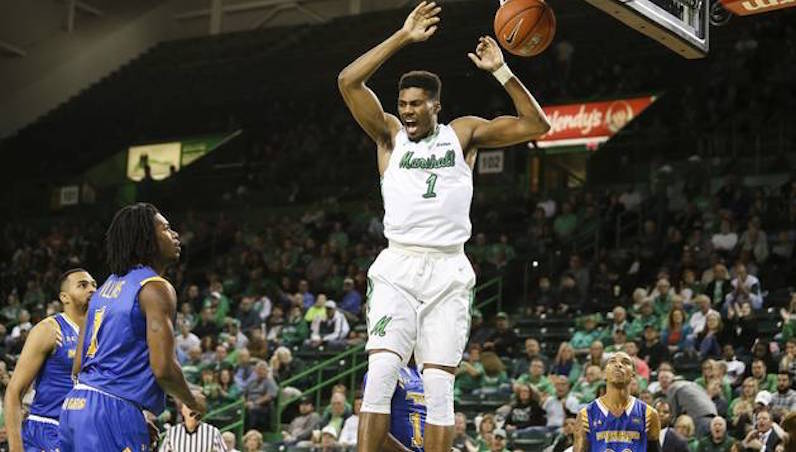 Marshall's Terrence Thompson (1) celebrates after throwing down a dunk against Morehead State during an NCAA college basketball game on Wednesday, Nov. 16, 2016 in Huntington, W.Va. (Sholten Singer/The Herald-Dispatch via AP)

The last few days have been a bit of a whirlwind for Wake Forest basketball. Over the weekend, Wake Forest landed a commitment from top-25 (2018) prospect Jaylen Hoard.

What do we need to know about Terrence Thompson?

Terrence Thompson, who began his career at Marshall, is a rebounding machine. The 6-foot-7 forward grabbed 15 percent of the total available rebounds while on the court. In his first full season as a starter for the Thundering Herd, Thompson recorded three double-doubles, including two 20-point, 10-rebound performances.

Thompson was one of just nine players in Conference USA last season to have a PER (player efficiency rating) above 18, shoot above 50 percent from the floor and average at least six rebounds per game.

According to Synergy Sports, too, Thompson was an efficient scorer of the basketball after a miss: 1.27 points per possession, 64.5 percent shooting on put-backs following an offensive rebound.

In total, Thompson was rather productive around the hoop on offense. Per Synergy: on non-post-up attempts at the basket, Thompson shot 59.1 percent and scored 1.24 points per possession — No. 22 in Conference USA (min. 50 possessions).

Another area of intrigue

If you’re a fan of the NBA, you know about Houston Rockets head coach Mike D’Antoni. D’Antoni is an offensive wizard that preaches pace and space, and currently orchestrates the league’s preeminent go-go pick-and-roll system.

Well, his brother, Dan, is the head coach at Marshall. The Thunder Herd, thanks to D’Antoni, have taken a similar analytical approach to basketball on the offensive side of the floor. Marshall was one of only eight Division I teams last season to have pick-and-roll ball handlers use at least 500 possessions, according to Synergy.

Thompson knows what it’s like to run with tempo, get up and down and function as a screen-roll player. He will be a good fit for Wake Forest’s offense. (This is why I thought William & Mary forward Jack Whitman would’ve been a strong addition, too.)

The last two seasons, Thompson partnered with point guard Jon Elmore — one of the top pick-and-roll guards in America. Thompson didn’t shoot that much out of pick-and-roll action (10-of-14), but he was efficient. If he’s ready to see an increased volume of touches, Thompson could have a great season in Winston-Salem.

Now, he can team up with Bryant Crawford, and try to fill the void left by John Collins as a rim-runner in Wake Forest’s powerful pick-and-roll attack.