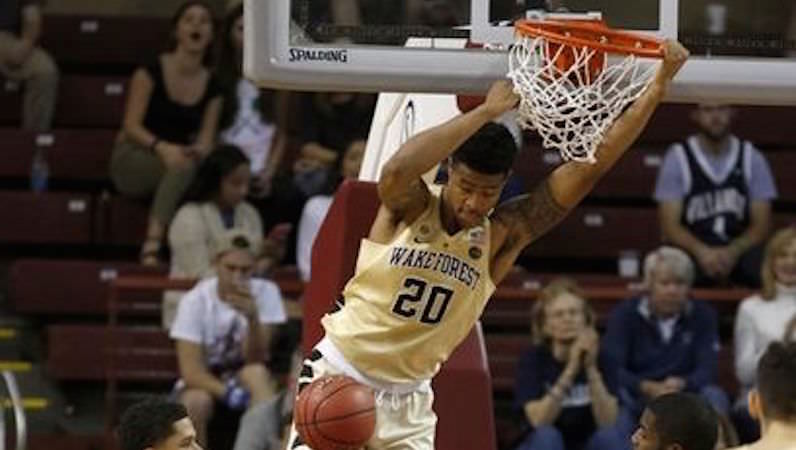 John Collins stands out as the ACC's most efficient player. (AP Photo)

Some friendly advice for Wake Forest’s remaining opponents: grab a bucket and hose — because John Collins has set fire to the ACC.

Last week, we looked at Collins’ sophomore dominance. However, after two more power-packed performances, it’s worth acknowledging the tear Collins has been on recently.

In the thick of conference play, the center has ripped off six straight games of 20 or more points; he hasn’t shot below 58 percent from the field in any of those games. Here are his averages over that run:

Incredible. He scored 137 total points on a measly 72 attempts while shooting just a shade under 62 percent from the field.

Collins is one of the nation’s best at drawing contact. According to KenPom.com, he ranks 11th in the country in fouls drawn per 40 minutes (7.7). The Wake Forest big fella attempted 48 free throws over the last six games, making 39 (81.3 percent) of them.

For the entire stretch, Collins posted a ridiculously efficient true shooting rate of 73.6 percent. He also blocked at least one shot in every game, including a career-high five in Saturday’s win over Georgia Tech.

Wake Forest has gone 4-2 in these six games and has outscored its opponents by a combined 32 points. Collins will have several opportunities to keep this stretch going, too.

Wake’s next three opponents — Notre Dame, NC State and Clemson — don’t offer much up in terms of resistance at the rim. The Fighting Irish, Wolfpack and Tigers all rank outside the top 65 of KenPom’s defensive efficiency metric.

The Demon Deacons are making a push for an NCAA tournament bid; it would be their first since 2010. A lot of work still needs to be done, but with Collins playing like this, Wake Forest has a chance to dance.