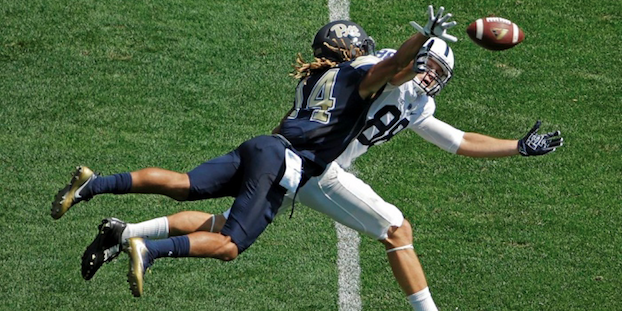 Pittsburgh finished 8-5 in 2016, tying for second place in the ACC’s Coastal Division despite fielding the ACC’s worst secondary. This past fall, the Panthers allowed the second-most passing yards per game in the FBS — 333.2.

That average was also the worst in the ACC. Only four other FBS teams allowed over 300 passing yards per game.

Whitehead’s return in 2017 gives Pitt an All-ACC-caliber player at strong safety. He recorded 65 tackles in just nine games, making him the top returning tackler in the Pitt secondary.

Whitehead and starting cornerback Avonte Maddox are Pitt’s best hopes for a dramatic improvement in the secondary in 2017. Maddox, who earned Honorable Mention All-ACC honors as a sophomore in 2015, led the Panthers with three interceptions this past season. He added 49 tackles and 8.5 tackles for loss.

At the other cornerback position, Damar Hamlin and Dane Jackson will have chances to prove they’re ready to replace Lewis.

Jackson recorded 18 tackles as a redshirt freshman in 2016. He returned his first career interception 20 yards for a touchdown against Syracuse. Hamlin appeared in three games as a true freshman, recording eight tackles.

Jay Stocker, a rising sophomore, and Dennis Briggs, a rising junior, are two possibilities to replace Webb at free safety.

Briggs recorded 18 tackles, 2.5 tackles for loss, forced a fumble and picked up a sack in 2016. Stocker recorded 12 tackles in nine games as a redshirt freshman this past season.

Stocker, Hamlin and Jackson will be essential to any significant improvement in the Pitt secondary in 2017. Together, they bring an infusion of youthful speed and athleticism to the unit.

The sky is the limit as far as improving Pitt’s secondary numbers. The development of the young players will be key, as well staying health.