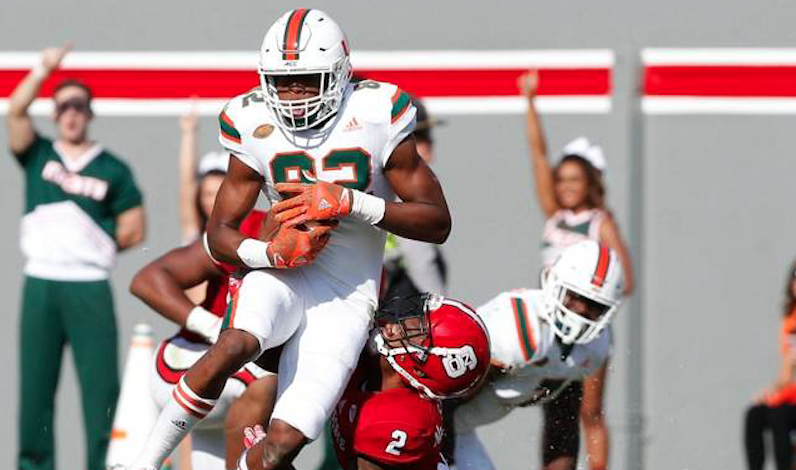 When you see his name at the top of the wide receiver offseason 40-yard dash honor roll inside Miami’s building — his time: 4.31 seconds — you know he’s special.

You think of what Ahmmon Richards can do on the field, and you think greatness.

What exactly is the ceiling for Richards, Miami’s true freshman superstar-in-the-making? Some of it depends on the who’s throwing him the ball, but it’s safe to say it is very high.

Richards, who led Miami and set a program freshman record with 934 receiving yards, received a host of freshman All-American accolades. His 19.1 yards per catch on 49 receptions dazzled, and he flashed the speed, shiftiness and savvy to break long gains against any defense.

With a brand-new quarterback running Miami’s offense, it’s fair to wonder if his stats will drop in his second year. He will also be the No. 1 focus of opposing defenses, given that Miami lost monster tight end David Njoku and deep threat Stacy Coley. A lot needs to go right for Richards, as talented as he is, to duplicate his 2016 debut year.

The replacement for outgoing quarterback Brad Kaaya, perhaps Evan Shirreffs, Malik Rosier or true freshman N’Kosi Perry, will need to be accurate and have the arm strength to get Richards the ball downfield. True freshman speedsters like Jeff Thomas and Mike Harley will need to take pressure off Richards by stretching the field. Running back Mark Walton will have to stay healthy. Seniors like tight end Chris Herndon and receiver Braxton Berrios will have to be reliable contributors.

But maybe Richards is just so good he can lift all other players.

Maybe that’s the ceiling for Richards. Instead of being a freshman All-American, he’ll graduate to full-fledged All-American status. He should also be a first-team All-ACC receiver after winning second-team honors from the media and third-team from the coaches last year.

That would be the expectation.

Could he win the Heisman Trophy? That’s not entirely realistic, given the way the trophy always goes to quarterbacks or running backs. The last player who didn’t play those positions to win it was Michigan cornerback/returner Charles Woodson in 1997. The last wideout? Michigan’s Desmond Howard (1991). Like Notre Dame’s Tim Brown in 1987, Howard was also a return man.

Richards may not be a Heisman winner, but he’s likely to be all-conference, and perhaps All-American if things break right. And he’s a darn good candidate to be Miami’s MVP.

Will N’Kosi Perry be the ACC’s next Heisman-caliber quarterback?