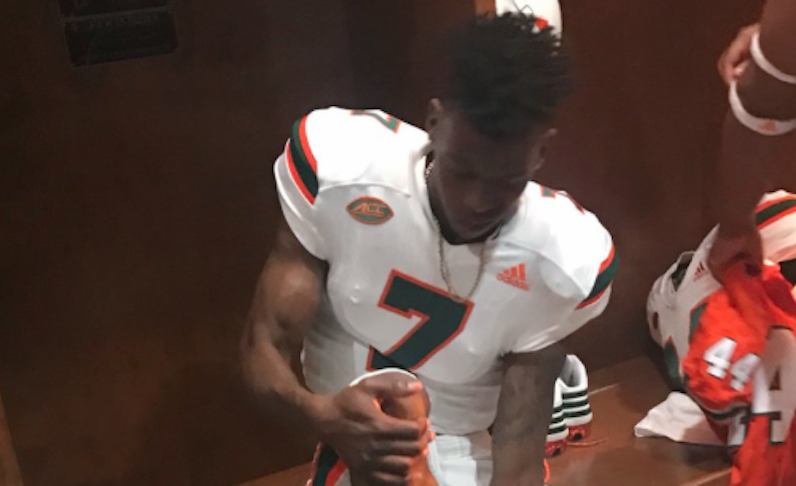 Coaches who have been around in the game as long as Mark Richt don’t throw praise around easily.

So when Richt brings up the names Charlie Ward, Deshaun Watson and Lamar Jackson when discussing N’Kosi Perry, it means something.

Does it mean Perry will be the next Heisman contender — or even a winner — from the ACC? There’s no guarantee of that.

But it’s quite possible.

Though Perry just arrived on campus on Monday with much to learn and plenty to prove, Richt may have the best athletic talent he’s coached at the position since Ward, his protégé at Florida State in the early 1990s. Ward, the Heisman winner in 1993, starred at point guard on the basketball court and played that way as a quarterback; he moved around and distributed the ball with quickness, poise and accuracy. Ward could use his legs to extend plays, make defenders look silly with a juke or blow by them and get a first down. Richt has no problem coaching pocket passers like Chris Weinke, Aaron Murray, Matthew Stafford and Brad Kaaya, but a quarterback with supreme mobility makes any offense better.

That’s what coaches believe they have in Perry, a 6-4, 185-pound native of Ocala, Fla. who threw for more than 4,000 yards, 46 touchdowns and six interceptions in his final two high school seasons. Perry has the arm strength ­­­­to make the throws Richt wants in his mutli-pronged pass game. However, until he shows it in a college environment, his accuracy will be a concern.

Where Perry really shines is his movement and, to use a made-up term recruiting sites love, escapability. He isn’t a 4.4-fast runner like former Georgia Tech quarterback Justin Thomas, but he’s plenty quick. In addition, he has instinctual awareness that rivals Jackson or Watson — or even Jameis Winston.

Perry, according to his high school footage, seems to be at his best when the play breaks down. He can freelance and find open receivers even without protection. That will take pressure off an offensive line used to blocking for the statuesque Brad Kaaya the last three years.

The major difference between Perry and Kaaya will show when Miami runs RPO concepts. The run-pass option, a packaged play that essentially lets a quarterback decide to throw, hand off or keep it and run, is a big part of many college football offenses, including Miami’s. They didn’t always work with Kaaya, who wasn’t a threat to run. Defenses figured that out fairly quick. Opponents will struggle more trying to corral Perry and his shifty, speedy wheels.

That is, of course, if the youngster is ready. As talented as Perry might be, the quarterback position is a vital one. Richt won’t hand him the reins until the right time arrives. That could be in Game 1, midseason or 2018, but The Perry Era is coming to Miami sooner than later.