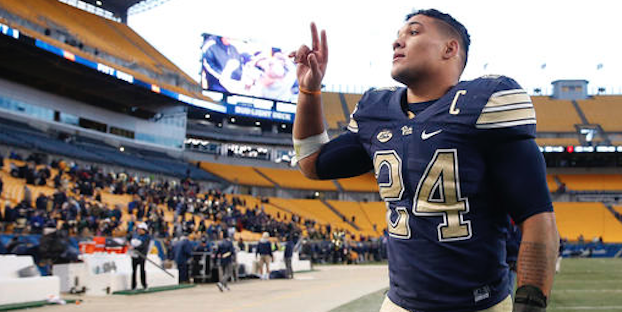 James Conner has been not only a tremendous on-field player for Pitt in recent years, but he’s also served as an inspiration off of it. Soon the big question for Conner will be whether or not he’ll pursue his NFL dream in the coming months.

The cancer survivor returned to the field this fall and ran for 1,060 yards and 16 touchdowns in the regular season. He demonstrated that he has regained his quickness and power following last September’s ACL injury as well as his subsequent cancer diagnosis in November.

There’s always the risk of further injury, particularly with running backs. So if there’s any motivation to go pro, Conner’s knee injury from last season would point him in that direction.

While nobody can challenge Conner’s talent level, nor his fighting spirit, he would benefit from returning to college one more year for a variety of reasons.

WalterFootball.com currently projects Conner as the No. 17 running back prospect for the 2017 NFL Draft, behind Florida State’s Dalvin Cook, Clemson’s Wayne Gallman, North Carolina’s Elijah Hood and others.

This is a strong year for running backs leaving college and entering the pro ranks. Draft prospects such as Cook and LSU’s Leonard Fournette challenge the modern wisdom of most NFL franchises, which are largely reluctant to burn a coveted early draft selection on such an injury-prone position.

While Fournette and Cook are possibilities for the first round, Conner wouldn’t get drafted until the third or fourth round at the earliest — providing ample opportunity to raise his stock considerably in 2017.

Along with the additional experience he stands to gain in Matt Canada’s high-scoring offense, Conner will be in position to improve his rushing totals, demonstrate further development to pro scouts and emerge as a top-10 running back prospect. For those reasons, another season at Pitt could pay off for the junior.