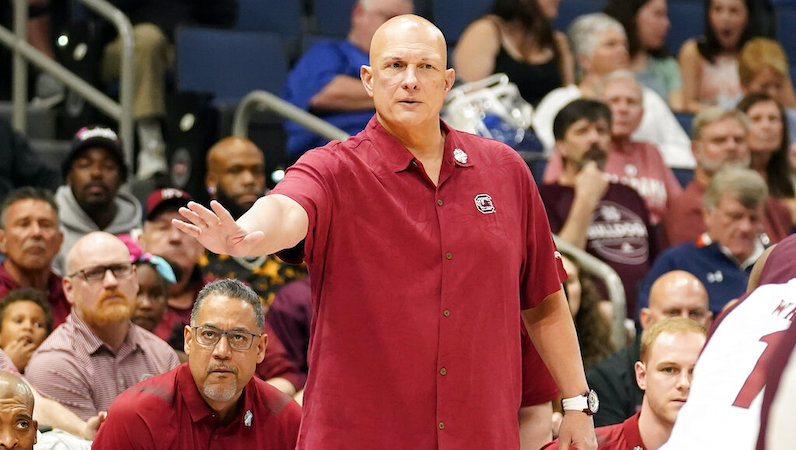 GG Jackson, one of the most sought after prospects in the 2022 recruiting class, may need to rethink things. The 5-star forward, who hails from the state of South Carolina, is considering Duke, North Carolina, Auburn, South Carolina, Georgetown and the G League.

With Frank Martin officially out at South Carolina, the only coach at the high-major level who hasn't made the NCAA tournament or NIT in the last five seasons who is still employed by that same school is Northwestern's Chris Collins.

Martin, 55, spent a decade with the Gamecocks. Following a successful stint at Kansas State (2007-12), Martin arrived at South Carolina in 2012. During his tenure, he led the Gamecocks to one NCAA Tournament appearance, which ended in the 2017 Final Four. North Carolina and Roy Williams went on to win the national title that year.

South Carolina was considered — along with Duke and UNC — to be one of the favorites to land Jackson, who recently took his official visit to the campus. That, however, will likely change now.

Jackson, a top-10 prospect in the 2022 class, recently won a state title in South Carolina. Following his senior year of prep ball, Jackson announced that he’d make a decision in the next week or two. This timeline has been pushed back, though. Jackson may wait until the end of the the NCAA Tournament.

Duke’s recruitment for Jackson is led by current associate head coach Jon Scheyer, who would be the program’s head coach when the blue-chip prospect arrives on campus. UNC assistant coach Jeff Lebo leads for the Tar Heels.