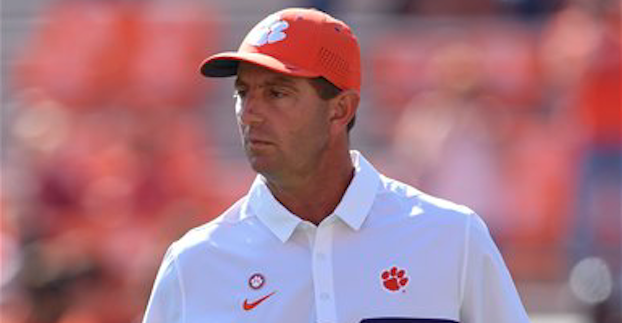 Dabo Swinney and his Clemson team will visit the White House next week. (AP Photo)

With time winding down in his recruitment, consensus 4-star wide receiver Jordyn Adams is down to Clemson and UNC.

The 6-2, 175-pound Adams is a playmaker extraordinaire. He played quarterback his junior season and produced 1,800 all-purpose yards and 18 touchdowns. Adams also returns kickoffs and punts.

The Tar Heels have one significant factor working in their favor — the presence of Adams’ father, Deke, on the UNC coaching staff. The Adams family arrived in the Carolinas by virtue of Larry Fedora’s hiring by the Tar Heels in the winter of 2011-12. Deke Adams, a former defensive standout at Southern Miss, left his alma mater along with Fedora to come to Chapel Hill.

Though Adams left UNC for South Carolina after one season, he remained close to his former boss. Fedora hired Adams again this offseason. Jordyn Adams, in turn, transferred from Blythewood High School in South Carolina to Green Hope High in Cary, N.C.

Clemson, on the other hand, has a wealth of elite receivers with eligibility beyond 2017. The list includes Deon Cain, Cornell Powell, Diondre Overton, Ray-Ray McCloud, Tee Higgins and Amari Rodgers.

Adams plans to announce his decision at Nike’s The Opening event held in Oregon in late June. Over the next month, the Tar Heel and Tiger coaches will work overtime in an effort to draw in this talented pass-catcher.