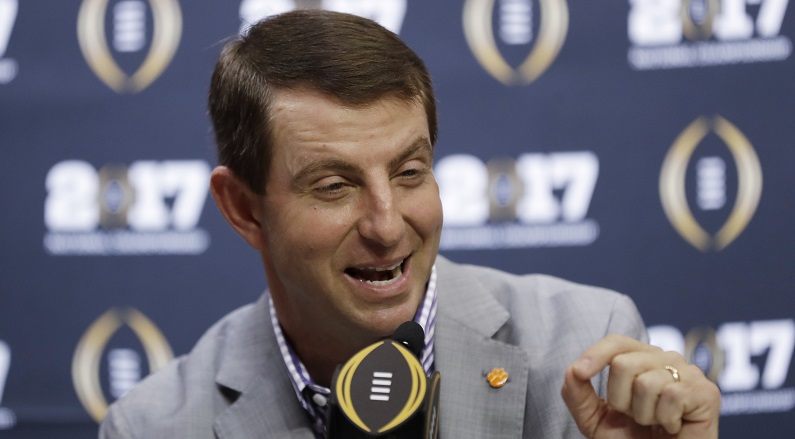 Zamir White is America’s top running back. Every major recruiting service says so. In 247Sports’ composite rankings, White is the No. 5 overall prospect in the country, regardless of position. Scout lists him in the same spot. Rivals ranks White No. 7 overall nationally among rising senior football prospects.

White, who attends Scotland County High School in Laurinburg, N.C., will be committing on June 27, his mother’s birthday. Clemson remains firmly in the hunt, as do Georgia, North Carolina and Alabama.

The Tigers welcomed White to Death Valley for their spring game in early April. White has been a frequent visitor to Athens over the past couple of years, and the Bulldogs stand as Clemson’s stiffest competition.

According to TheClemsonInsider.com, White is friends with multiple Clemson commitments; those players include fellow 5-stars Trevor Lawrence (quarterback) and Xavier Thomas (defensive end). The Tigers have been targeting White since his freshman year, when he emerged as an elite recruit.

Clemson doesn’t have the scholarships to take a full class in the 2018 recruiting cycle. The coaches have targeted White as their clear priority at running back. That same approach worked in 2015 when the Tigers added in-state 4-star Tavien Feaster.

C.J. Fuller and Adam Choice are both fourth-year juniors. If either has a season anywhere close to Wayne Gallman’s 2016 season, they may do as he did and head off to the NFL. Even if Fuller, Choice or both return for 2018, Feaster would be the only experienced back behind them. Feaster and Travis Etienne project as the only two scholarship running backs on the Clemson roster beyond 2018.

With White’s talent, it’s nearly impossible to imagine he’ll redshirt anywhere he goes. Even if Clemson returns Fuller, Choice, Feaster and Etienne in 2018, White has ability that will prove difficult to keep off the field. For that reason, Clemson has made him one of their top targets in the entire 2018 class.

How will Clemson replace Wayne Gallman?