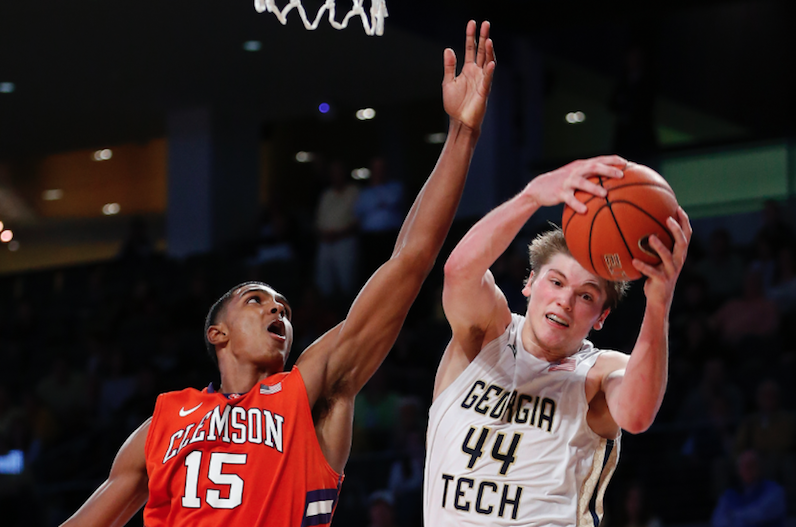 Clemson basketball is in the midst of a six-year NCAA Tournament drought, but forward Donte Grantham (15) will try to change that next season. (AP Photo)

Clemson basketball received great news for 2017-18 on Tuesday as forward Donte Grantham announced he’ll return for his senior campaign. The announcement came just a day before the NCAA’s deadline for underclassmen to withdraw from the NBA Draft.

Grantham’s return is important for a Clemson squad that is losing multiple key players, including All-ACC standout Jaron Blossomgame. Grantham started 32 of 33 games last season and is a complete veteran forward who can shoot and rebound. The 6-8 Grantham finished third on the Clemson roster in made three-pointers and averaged 7.3 points and 4.3 rebounds per game.

The Martinsburg, W.Va., native is Clemson’s top returning player in terms of minutes played and rebounds. Among Clemson’s returning players, only point guard Shelton Mitchell and shooting guard Marquise Reed had more points and assists than Grantham in 2016-17.

Head coach Brad Brownell heads into the 2017-18 season on the hot seat. The Tigers haven’t made the Big Dance since 2011 — accomplished largely with Oliver Purnell’s recruits.

At times, Clemson looked like an NCAA Tournament team last season. A 73-68 triumph over Wake Forest on New Year’s Eve gave the Tigers an 11-2 mark. Before that, the Tigers beat UNC Wilmington and eventual Final Four participant South Carolina.

However, an overtime loss to North Carolina started Clemson on a downward spiral. The Tigers ultimately dropped 14 out of their final 20 games.

Grantham’s return gives the Tigers three seniors heading into the 2017-18 season. Along with Grantham and shooting guard Gabe DeVoe, Clemson is welcoming in graduate transfer Mark Donnal from Michigan. Combined with juniors Shelton Mitchell, Marcquise Reed and David Skara, sophomore Elijah Thomas and a talented freshman class, the Tigers have the pieces to rise in the ACC standings.

“I know last year was a disappointment as far as expectations for the team and also individual performances,” Grantham wrote on Instagram. “But I think with the group we have coming back and new additions we’re just as talented as we were.”