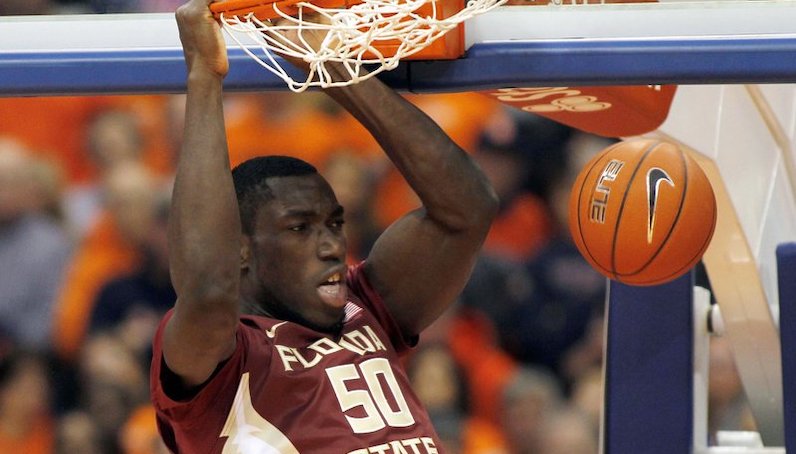 In this Jan. 11, 2015, file photo, Florida State's Michael Ojo jams in the second half of an NCAA college basketball game against Syracuse in Syracuse, N.Y. After sitting out last year due to a knee injury, Florida State center Michael Ojo already has two double-figure scoring games and has markedly improved at the free throw line. (AP Photo/Nick Lisi, File)

According to a report from Euro Hoops, Ojo collapsed while running and died from a sudden heart attack during a practice.

A native of Nigeria, Ojo arrived in Tallahassee as a member of Florida State’s 2012 recruiting class. Quickly, Ojo established a name for himself around the ACC and college hoops universe due to his immense size: 7-foot-1, 295 pounds. For a guy that played very little competitive basketball before college, Ojo — who moved to the United States in 2012 — learned on the fly.

Over the course of his five seasons at FSU, though, Ojo emerged as a key player — both in terms of his paint production and overall leadership.

This definitely a tough one man.. One of the best dudes I done came across. Was the first to welcome me to fsu and was nothing short of a big brother my freshman year and even after.. it’s crazy to think we was just talking about life last week.. Gone miss ya fasho O!! ❤️❤️ pic.twitter.com/fWJGzkaV29

During his career, Ojo appeared in 131 games (78 starts); averaged 2.7 points and 2.5 rebounds per game. After taking a redshirt for the 2015-16 season, Ojo started 34 of Florida State’s 35 games in the 2016-17 season. Ojo never played a high volume of minutes in Florida State’s deep frontcourt rotation, but he was alway impactful.

As a redshirt senior, he shot 56.4 percent from the field, while also performing as one of the ACC’s top offensive rebounders and shot blockers. FSU went 26-9 that year.

In a way, Ojo served as a bridge to some of the incredible success Florida State has gone on to accomplish the last four seasons. Jonathan Issac, Dwayne Bacon, Terance Mann and Trent Forrest were all on that roster, too.

While at Florida State, Forrest — the lone senior on the 2020 ACC Championship roster — helped guide the Seminoles to a 104-34 (.753). Forrest also evolved into one of the best team leaders in recent ACC sports history.

Leonard Hamilton is one of the true trail blazers of the basketball. More people have taken notice: the obstacles he’s overcome make building one of the premier programs in college basketball even more impressive.

Florida State’s success on the floor is certainly noteworthy; however, the program has started to gain recognition for what it was doing off the court, too. It’s obvious that the vibes around FSU basketball are as good as it gets in college sports. Ojo was the physical embodiment of that — in almost comedic proportions.

After leaving FSU, Ojo went on to have a brilliant professional career. He started in Serbia with FMP, then went on to play two seasons with Crvena Zvezda.