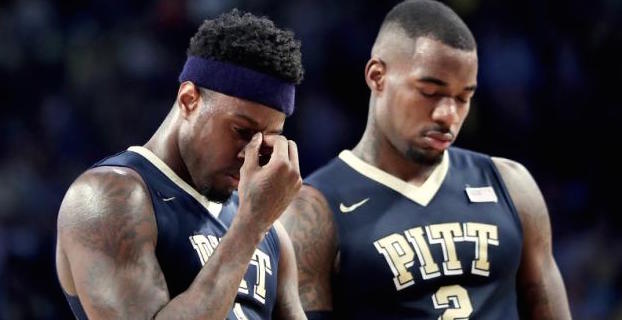 I touched on this briefly in Thursday’s piece on Luke Kennard, but it’s worth bringing back up here: Michael Young and Jamel Artis of Pittsburgh currently rank first and second, respectively, in the ACC in scoring. Young scores 22.8 points per game, while Artis slaps up 20.8.

What makes this even more impressive, however, is the fact that no two ACC teammates have ever finished one and two in scoring.

When Pitt takes on Notre Dame this Saturday afternoon, it will be the team’s first ACC game of the season; there’s a lot of basketball yet to be played. However, it’s still pretty neat to see two teammates in somewhat uncharted territory. In the past, a few sets of teammates — like J.J. Redick and Shelden Williams in 2006 and Jason Williams and Shane Battier in 2001 — have gotten close, but no one in league history can make this claim.

Here’s the thing, though: these two guys aren’t desperate chuckers. Yes, they shoot a lot, but both players are making more than 51 percent of their attempts. Young and Artis both have true shooting rates of 63 percent, which is incredibly good, especially once you factor in the volume of possessions they use. Artis uses 28.2 percent of Pitt’s possessions when he’s on the court; Young, however, is even higher than that — an ACC-leading 32.8 percent.

Nothing can stop me, I’m all the way up

The ACC awoke Friday morning to find three of its 15 teams ranked inside of Ken Pomeroy’s top four: No. 1 Virginia, No. 2 Duke and No. 4 North Carolina.

All three of those teams, along with Kentucky and Kansas, currently rate out as both top 10 offenses and defenses in terms of their adjusted efficiency — points per 100 possessions.

Once again, the ACC affirms its status as a basketball powerhouse.

Putting the 0 in Ojo

How do you score points without shooting the ball? Well, just ask Florida State’s Michael Ojo, who scored two points while attempting zero field goals in the win over Wake Forest.

The senior center grabbed three rebounds and picked up two fouls during his 10 minutes of playing time, and that was about it. However, if you check his advanced box score numbers, you will find an awful high figure in the offensive rating column. According to Sports-Reference, Ojo produced 2.37 points per possession. This is because Ojo was fouled by Wake’s Sam Japhet-Mathias after grabbing an offensive rebound. Ojo stepped to the line and buried the two shots.

It’s safe to say that if a players scores points without attempting a field goal, some numbers are going to reflect that in his or her favor. Ojo, for the record, also produced a true shooting rate of 113.6 percent. See, numbers in a small sample can be fun.

Welcome back, Ahmed Hill! After missing all of the 2015-16 season with a partially torn patella tendon, the 6-foot-5 wing has returned in style this year. Hill is second on Virginia Tech in scoring — 14.9 points. He’s shooting 44.7 percent on a healthy 11.6 three-point attempts per 100 possessions.

The Hokies of Buzz Williams are 11-1, after feasting on a mostly cake schedule; that said, they do have wins over Michigan and Nebraska. They rank 39th in KenPom’s offensive efficiency: 111 points per 100 possessions.

Hill has been great all season, but he’s turned it on the last three weeks. In Virginia Tech’s last four games, Hill has averaged 20 points per game, while shooting 53.3 percent from the floor; he’s also gotten to the line a lot during this stretch, too. The redshirt sophomore has attempted 25 combined free throws over Tech’s last four wins.

Duke awaits Virginia Tech in the conference opener for both teams on Saturday.