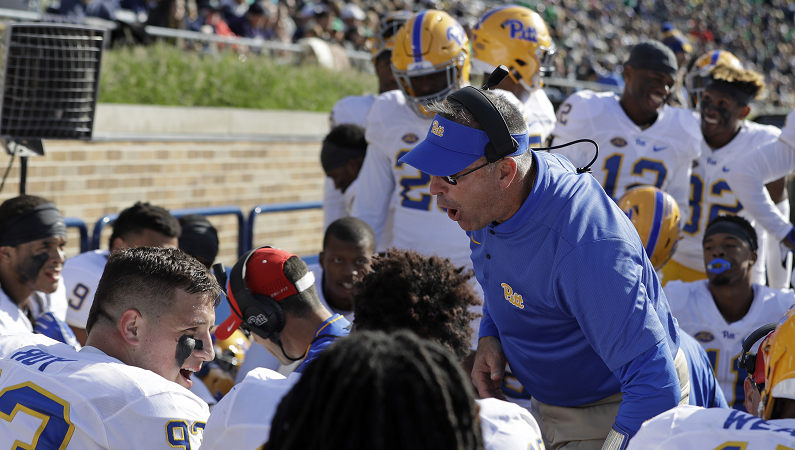 Pitt football finished its challenging non-conference schedule Saturday by almost upsetting Notre Dame. The Panthers have already played a pair of top 10 programs in Penn State and UCF prior to their 19-14 loss in Sound Bend. Can these out-of-league battles prepare Pitt for a breakthough run in the Coastal Division?

The Panthers blew a winnable road game at North Carolina after beating Georgia Tech to open 1-0 in ACC play. Then Pitt toppled longtime rival Syracuse 44-37 in overtime to improve to 2-1 in conference games.

The Panthers have a huge swing-game stretch in late October and early November that will determine not only their postseason fate. It will determine whether Pitt could be a surprise contender in the Coastal Division.

Sizing up the Coastal

The Panthers host Duke (Oct. 27), travel to Virginia for a Friday night game (Nov. 2), and then host Virginia Tech (Oct. 10) in the final home game.

Pitt football has an advantage going into the contests against the Blue Devils, Cavaliers, and Hokies. Three of Pitt’s first seven games were against teams who opened the season with combined records of 15-1. But the thing about Pitt is you never know what you’re going to get.

One week they go out and blow a winnable game against arguably the ACC’s worst team in North Carolina. And then they go out and drop 44 points on a Syracuse team whose only prior loss was a last-minute heartbreaker at Clemson.

Pitt is struggling statistically on both sides of the ball, with a -6.8 scoring margin per game.

Those numbers are partially skewed by blowout losses against Penn State (51-6) and UCF (45-14). But the Panthers also gave up 38 points to UNC, and 37 points to Syracuse.

Through the first half of the regular season, Pitt was giving up a less-than-stellar 420.8 yards per game, which ranked next-to-last in the ACC. And the Panther offense was averaging 353 yards per outing, which ranked 12th in the league.

The Panthers secondary has improved somewhat from atrocious past defense numbers in recent seasons. They’re barely among the top half of ACC teams, allowing 224 passing yards per game. But opponents are grinding Pitt out on the ground, averaging 196.8 yards per contest, which ranked 11th in the ACC at midseason.

Sophomore quarterback Kenny Pickett has played respectively well in his first run as a starting quarterback. Though his five interceptions are somewhat alarming, he ranked fourth in the ACC at midseason with a 61.3 percent completion average.

Pickett is not being asked to air it out as much as relying on short, safer passes. The Panthers are employing a conservative offense built around their rugged senior running back Qadree Ollison. Ollison ranks third in the ACC with 596 rushing yards, and his nine rushing touchdowns rank second in the league, behind only Clemson’s Travis Etienne.

Taysir Mack, Pitt’s graduate transfer wide receiver, ranks fourth in the ACC with an average of 22.1 yards per catch, and 11th in the league with an average of 53 yards per game. But Mack only has 12 catches. The Panthers have four receivers (Maurice Ffrench, Rafael Araujo-Lopes, Mack, and George Aston) with at least 12 catches. But they only have six touchdowns between them.

Pat Narduzzi hasn’t won quite at the level many Pitt fans were hoping for when he came to the Steel City from Michigan State. Narduzzi helped turn the Spartans into a national championship contender.

The Panthers had back-to-back 8-5 seasons in Narduzzi’s first two years, and knocked off then-undefeated Miami despite a 5-7 campaign last fall. They’re the only ACC team since 2014 to beat Clemson in Death Valley.

Under Narduzzi, Pitt has shown they can beat anyone they play in the ACC.

Or lose to anyone.

Narduzzi’s job isn’t in any real jeopardy at the moment. But that gets back to the upcoming three-game stretch against Duke, Virginia, and Virginia Tech.

The Panthers are quite capable of winning all three games, which could set them up for a showdown with Miami in the regular season finale for the Coastal Division title. But if the defense struggles the way it has against numerous opponents, the Panthers could also lose all three games, which would threaten bowl eligibility, and tighten the pressure on Narduzzi heading into 2019.

Read more: Positives and negatives for Pitt football on the recruiting trail