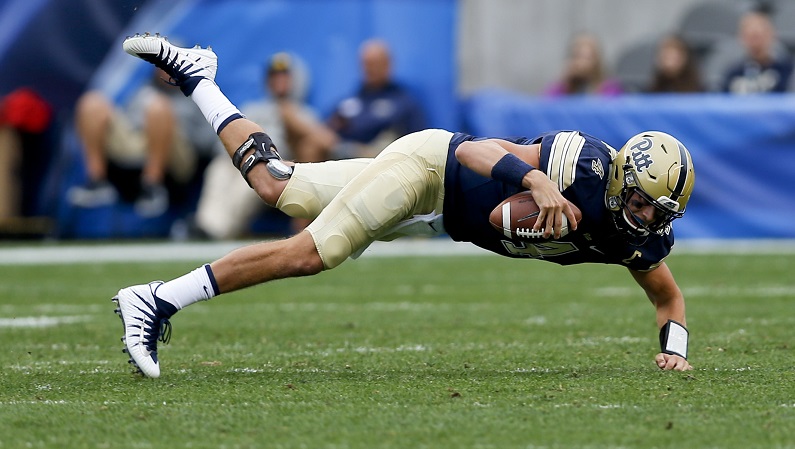 Pittsburgh quarterback Max Browne (4) tumbles to the ground after he is hit for a sack as he play in an NCAA football game against Youngstown State, Saturday, Sept. 2, 2017, in Pittsburgh. (AP Photo/Keith Srakocic)

For the moment, Pittsburgh is committed to graduate transfer quarterback Max Browne. But with a younger player breathing down his neck, Browne is going to have to step up in the coming weeks to remain the starter. Browne acknowledges that he’s on a short leash, and must improve his play in order to remain above Ben DiNucci atop the Panthers’ depth chart.

Browne was benched at Southern Cal three games into the 2016 season, which resulted in his transfer to Pitt. Now he’s fighting off DiNucci, a third-year sophomore. DiNucci didn’t play in Pitt’s season-opening triumph against Youngstown State. But he was 5-of-9 passing for 49 yards and used his legs to produce a 15-yard carry, along with a 3-yard scamper for a score, in Pitt’s 33-14 loss to Penn State.

Browne was 19-of-32 for 138 yards and two interceptions against the Nittany Lions. They weren’t spectacular numbers, but they didn’t necessarily lose Pitt the game. His receivers let him down with multiple ill-timed drops. The Panthers couldn’t really get their running game going against Penn State’s stiff defense.

Browne was 36-of-56 through Pitt’s first two games – a 64.3 percent completion average. But there’s two problems – he’s not converting a lot of big plays, and he’s not getting the ball in the end zone. Browne was actually pulled twice from the Penn State game – once after taking a shot above his right eye that created a cut, and then later, once the Panthers were too far behind to win.

Browne threw for 278 passing yards in Pitt’s first two contests – 140 against Youngstown State, and 138 against Penn State. Pitt’s longest pass play against both Youngstown State and Penn State was 30 yards. He threw one touchdown pass against Youngstown State, but failed to reach the end zone through the air against Penn State. Browne has also been under pressure, having been sacked six times through Pitt’s first two outings. The completion percentage numbers are respectable, but the production must go up for Browne to solidify his starting role.

DiNucci provides something to the Panthers offense that Browne doesn’t – mobility. He’s not as solid yet in the pocket as Browne, which is one big reason why Browne is still the starter. But given their differences, it’s possible that the Pitt coaches might try to find ways to use DiNucci’s versatility in certain situations. He could be especially useful on goal line and short-yardage plays.

DiNucci’s presence also ensures that Browne can’t afford to get complacent. Lots of times when graduate transfers arrive at a school, there’s nobody behind them that can realistically challenge for the starting job. That’s why they were signed in the first place. But with DiNucci fighting for snaps, Browne knows that he’s only one poor performance away from losing his job. The position competition will keep Browne on his toes.