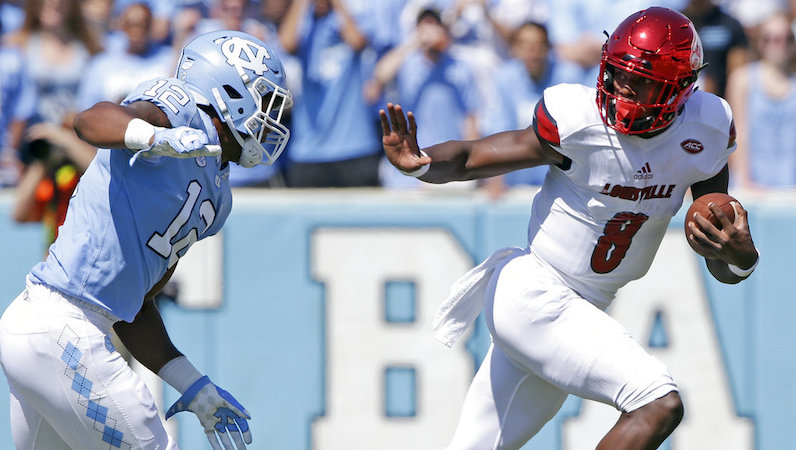 Lamar Jackson of Louisville has gotten off to a hot start defending his Heisman Trophy. Jackson has completed 65 percent of his passes (9.1 yards per attempt), and has back-to-back games of 375-plus yards passing and 100 yards rushing.

But that’s not all. Not even close.

According to ESPN Stats and Info, Lamar Jackson became just the second quarterback in FBS history to record consecutive games of 300 yards passing and 100 yards rushing. The first and only other time this has happened occurred back in 2007 — Chase Clements at Rice (against UTEP and SMU).

Jackson has thrown for 771 yards in Louisville’s first two games. He’s the sixth ACC quarterback (since 2000) to throw for 700-plus yards in the first two games of the season.

Against UNC, Jackson became the first player to collect three passing and three rushing touchdowns in the 2017 season, too.

This performance from Jackson marked just the fifth time in FBS (since 2000) that a player has thrown for 300 yards, run for 100 yards, thrown three touchdown passes and run for three touchdowns in the same game.

Of course, things are about to get far more challenging this Saturday — when Louisville hosts Clemson. The Tigers currently rank fifth nationally in scoring defense and second in yards allowed per game (118.5).

As usual, Jackson has been incredibly explosive in both the run and pass game. However, let’s take a minute to appreciate what he’s done through the air in 2017.

So far in 2017, 13 ACC quarterbacks have completed at least 10 passes of 10-plus yards. Here’s how Jackson stands atop the list.

NC State’s Ryan Finley ranks second in the league in this metric. Finley has completed 27 passes of at least 10 yards — six fewer than Jackson — and he’s done so on 19 more completions.

It’s important to note: not only is it incredibly early, but some ACC teams have played just one game this season. Others teams, like Florida State, have also had to deal with injuries at the quarterback position.

These numbers, however, also don’t factor in receptions when a receiver catches the ball around the line of scrimmage and runs for 10-plus yards.

It would be an understatement to simply say he’s most the most of it. Jaylen Smith is a monster, and his performance is noteworthy.

Smith has posted back-to-back 100-yard receiving performances; he ranks third nationally with 300 receiving yards. The junior has 1,275 career receiving yards — 23.5 percent of those have been accumulated in the last two games.

Lamar Jackson targeted Smith 14 times against UNC; the 6-foot-4 junior hauled in nine of those for a catch rate of 64.3 percent. Smith caught the first six passes thrown his direction on Saturday, including a 75-yard bomb from Jackson. Five of Smith’s receptions went for 16-plus yards, too.