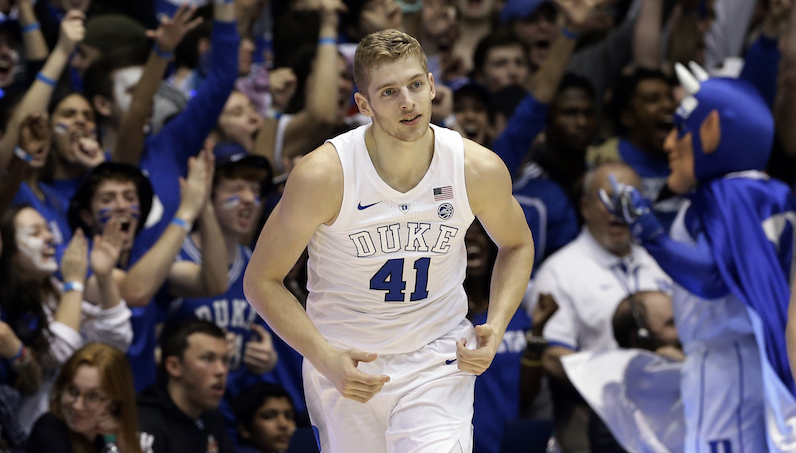 Duke's Jack White (41) reacts with the crowd following his 3-point basket against Miami during the first half of an NCAA college basketball game in Durham, N.C., Saturday, March 2, 2019. (AP Photo/Gerry Broome)

After it seemed like Jack White would be able to go Friday night against Virginia Tech, that appears to no longer be the case. Mike Krzyzewski, speaking with the media, said that White is doubtful to play in the Sweet 16.

Coach K said Marques Bolden knee has improved such that he doesn't need to wear a brace like he did last weekend. No decision on Jack White but said it's more doubtful than anything

The defensive side of the floor is where White makes his presences felt most, though. White can switch and guard four positions. He also has a defensive rebound rate of 17 percent, which is solid, and he’s strong at the rim — 5.1 percent block rate.

On the flip side, Marques Bolden, who injured his knee during a nasty collision in the loss at UNC, appears to be improving. Per K, Bolden will no longer need to play with a brace. That, too, is a big deal for Duke’s defense. Bolden is a solid rim protector — 3.6 blocks per 40 minutes — and his ability to move, guard in space helps unlock Duke’s switching defense.