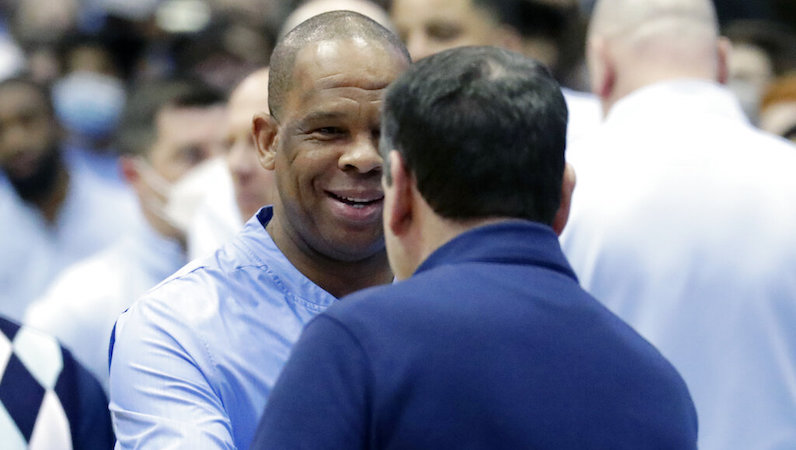 All eyes of the college basketball universe will, once again, turn toward Durham on Saturday. Duke and UNC will play for the second time this season — in a showcase that’ll double a historical event. After 42 seasons at the helm of Duke basketball, this will be Mike Krzyzewski’s final home game at Cameron Indoor Stadium.

This game will be a spectacle — rich with motivation on both sides of the sport’s top rivalry. For UNC, it’s a chance to avenge the first matchup, which Duke won 87-67 back on Feb. 5, and it would essentially punch a ticket to the 2022 NCAA Tournament.

Duke, on the other hand, will look to close out Coach K’s regular season tenure with a win over North Carolina. Unless the two teams meet in Brooklyn at the ACC Tournament, this matchup will work as the coda for Krzyzewski vs. UNC.

Beyond narratives, Duke is vying for a 1-seed in the NCAA Tournament, too.

Ahead of the game on Friday (March 4), though, ESPN will put together a day of giveaways for Duke students in “Krzyzewskiville,” starting at 2 p.m.

As usual, ESPN will carry the game. However, there will be a variety of different program during the day, leading up to tip-off.

This will start with ESPN’s College Gameday at 10 a.m.

After that, pre-game coverage on the ACC Network will start at 4:30 p.m.

The game will start at 6:00 p.m. on ESPN. However, there will also me an alternative/simulcast on the ACC Network: “Coach K Curtain Call.”

Following the game, the ACC Network will also have post-game coverage from Durhan.

For his career, Krzyzewski is 50-46 against UNC. This includes an impressive 18-23 record for games in Chapel Hill. Coach K went 23-19 in games with UNC with Roy Williams as its head coach.

N/A, check back later this week