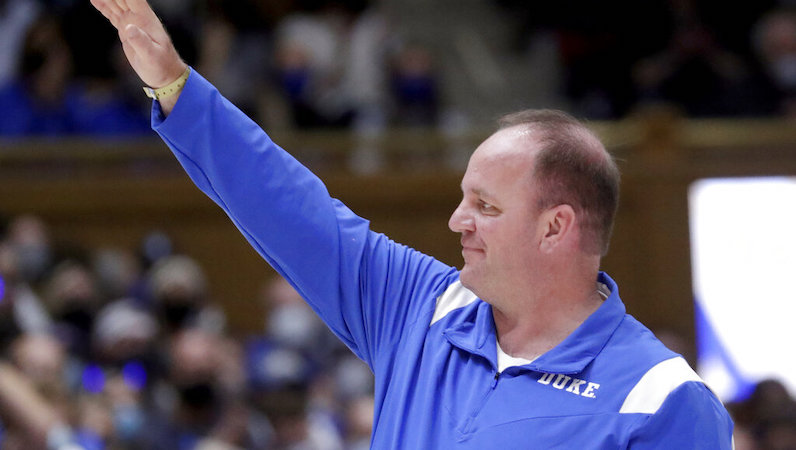 New Duke head football coach Mike Elko waves to the crowd as he is introduced during a break in an NCAA college basketball game between Duke and South Carolina State Tuesday, Dec. 14, 2021, in Durham, N.C. (AP Photo/Chris Seward)

Johns, 46, will arrive in Durham from Memphis; he just spent the last three seasons as the offensive coordinator for the Tigers.

During his coaching career, Johns spent much of his time in the Midwest: Northwestern, Western Michigan and Indiana. Johns grew up in Ohio and played quarterback for Dayton in the 1990s. However, Johns also had a stint on staff with Texas Tech — working with Kliff Kingsbury.

Duke finished the 2021 season ranking No. 102 in scoring offense and No. 61 in passing yards per game. The Blue Devils are set to have a great deal of turnover on offense, too, including the departure of leading rusher Mateo Durant (NFL Draft) and leading receiver Jake Bobo (transfer UCLA).

Blue Devils stand at No. 1 in this week’s ACC Basketball Power Rankings