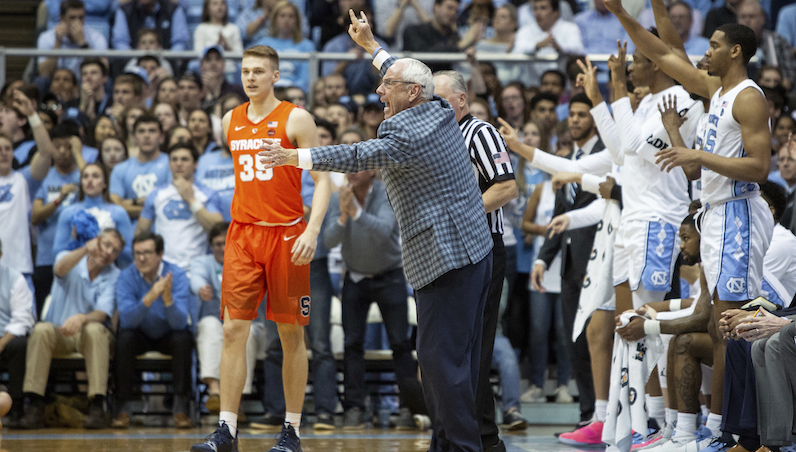 Since committing to North Carolina last June, it’s been a busy calendar year for Day’Ron Sharpe. The 5-star power forward helped lead South Central (Winterville) HS to a 4A state title in North Carolina. Next season, though, Sharpe will suit up for a different team — prep basketball powerhouse Montverde Academy in Florida.

Sharpe announced the decision on his Instagram page. He averaged 16 points and 10 rebounds per game as a junior en route to an MVP effort in the title game.

Day’Ron Sharpe, the UNC recruit who led South Central to a win over West Charlotte in the NC 4A basketball state final, will play his senior season at Montverde (Fla) Academy

At Montverde, Sharpe will join a loaded roster that features 2020 5-star combo guard Cade Cunningham, one of the top basketball products in the country. While Cunningham is considered to be an Oklahoma State lean, Duke and North Carolina are in the mix, too. Regardless of his landing spot, Cunningham is a future star that projects out as a potential franchise-changing player in the NBA.

The name Montverde should sound familiar. The program has claimed multiple national high school titles, including the 2018 squad which was led by RJ Barrett.

A few weeks back, Sharpe participated in the Adidas Gauntlet Series. According to data compiled by Neil Johnson of ESPN Analytics, the 6-foot-10 Sharpe stood out. In 12 games, he posted an effective shooting rate of 64 percent, a 25.5 percent usage rate (60.7 percent free throw attempt rate) and an offensive rebound rate of 15.5 percent.

After the @GauntletSeries had their last event this past weekend, here's a look at the top performers in 17U across league games and the summer championship. pic.twitter.com/QTrcgjxsPJ

These are all excellent numbers; however, two stats also jump out. He posted an assist rate just under 20 percent, which is outstanding for a frontcourt player. Sharpe also led the event in Box Plus/Minus (BPM).

ACC Network to feature UNC Basketball in an all-access show