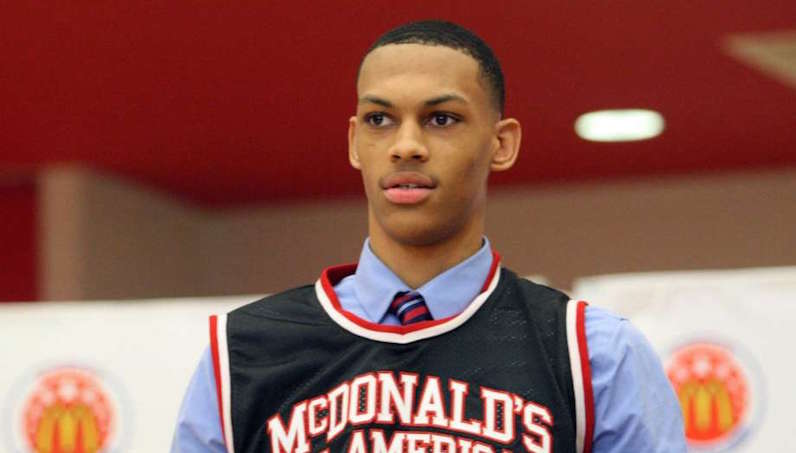 Once a Syracuse commit, Darius Bazley made history when he opted to go to the G League instead of college. (AP Photo)

In the final week of March, Darius Bazley — a top-10 prospect — made history. The 6-foot-9 forward, a Syracuse commit, decided to become the first (notable) high school prospect to go straight from prep basketball to the G League.

The move is a bold one; over the last week, it’s drawn all sorts of praise. Bazley’s decision to go the G League path may cause a paradigm shift the in basketball universe — how top prospects choose to spend their last trip around the sun before advancing to the NBA.

Clearly, a lot went into this decision. With that in mind, it’s worth analyzing Bazley’s predecessors, why the G League is becoming a more viable option and the impact on Syracuse basketball.

He isn’t the first prep all-American to make a jump outside of the NCAA before entering the NBA Draft. Back in 2008, Brandon Jennings opted to play in Italy; a few years later, in 2014, 5-star guard Emmanuel Mudiay left Dallas for a $1.2 million deal in China. Both players went on to become lottery picks, too.

More recently, Terrance Ferguson spurned Arizona — recruited by Book Richardson (!) — to play professionally for a season in Australia. You can now find Ferguson, picked 21st overall in 2017, playing rotation minutes for the Oklahoma City Thunder and appearing in Gatorade ads with his teammate Paul George.

What’s the difference between me and you?

In 2009, Latavious Williams — then a top-40 prospect, recruited by Clemson — elected to avoid college and enter the NBA’s developmental league — then the D League. Williams, however, played two seasons in the D League, averaged 10.3 points, was drafted in the second round by the Miami Heat (48th overall in 2010) and never played a minute of NBA basketball. Currently, he still plays ball in Europe.

Darius Bazley is different from Williams, and the aforementioned prep prodigies that played abroad for a season, though. For starters, as a top-10 recruit, Bazley’s path to NBA is clear: he projects out as a 2019 lottery pick.

Jennings, Mudiay and Ferguson differ, too. That trio went abroad and played for larger sums of salaried money than Bazley will make next season in the G League. The max salary a G League team can pay Bazley next season: $26,000. (This is before you factor in endorsement money, like shoes, too.)

G League on the Rise: Darius Bazley plays a role

Those who only pay attention to college hoops may not realize — in recent years, the G League has made serious strides to improve. Sooner rather than later, all 30 NBA teams will have a one-to-one affiliation with a G League team — another major step.

These teams and rosters will become a training ground for the parent NBA clubs; organizations will be able to try out different in-game strategies, styles of play and focus on player development. It’s all part of an important investment.

Other important tentpoles: The annual G League Showcase continues to evolve as an event; G League attendance records are on the rise, too.

Intertwined with this is how the G League serves as a passageway to the NBA for prep stars, like Bazley. In an interview with NBA news-breaker Sham Charania of Yahoo! Sports, Bazley mentioned that the G League rarely — if ever — comes up as an option for prep basketball stars.

Whenever I’m at basketball camps, I never hear any discussion about going from high school to the G League. But I believe now, there will be discussion about it. Not only are you getting paid to play the sport you love, but you’re getting the development that you need and want.

An anonymous NBA team official also mentioned to Charania that Bazley’s decision could “open the floodgates” for future prospects; it could present the G League as a quality alternative to playing college basketball.

(It will be interesting to monitor how this changes/evolves with the future or possible elimination of the NBA’s infamous “One and Done” rule.)

The Impact on Syracuse Basketball

Let’s rearrange the scope — from looking big picture at the future of basketball, to the outlook for Syracuse basketball.

Syracuse, powered by its defense, is fresh off a surprising Sweet 16 run. The Orange seemed poised to build on that in 2018-19 with the arrival of Darius Bazley, 4-star guard Jalen Carey and 3-star Buddy Boeheim. Obviously, those plans will be reconfigured.

Assistant coach Allen Griffin, who led the recruitment on Bazley and spoke to him just before the decision was announced publicly, said he didn’t try to change the prep prodigy’s mind.

In an interview with ESPN Radio earlier this week, Jim Boehim said he still believes that college basketball is the ideal market for star high school basketball players:

A lot will depend on the NBA decisions of Tyus Battle and Oshae Brissett, but even without Bazley, Syracuse could have a pretty good team next seasons. The Orange have already landed in a few way-too-early top 25 polls; Vegas currently has Syracuse as 80-1 odds to win the 2019 national championship — same as several other ACC programs: Florida State, Louisville and Virginia Tech. Although if Battle stays in the draft, all bets are off.

As far as Boeheim’s claim goes, who knows? These are interesting times for college basketball; the future is being molded now. Let’s see what it holds.