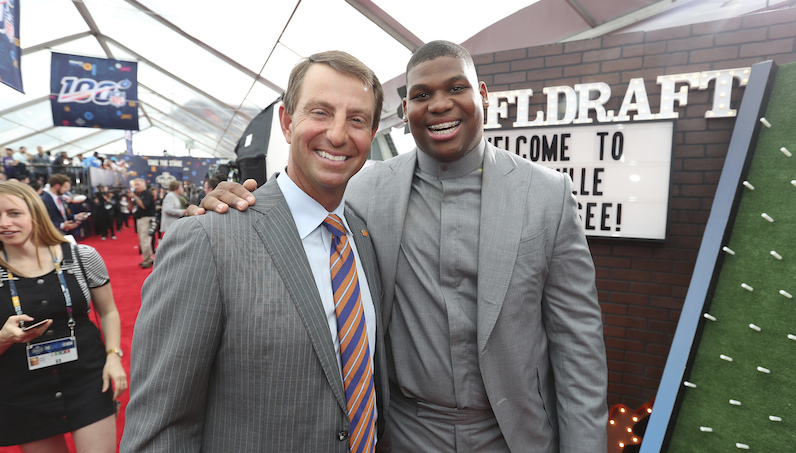 The rich get richer — literally. A few months after guiding Clemson to its second national title (in three years) under his watch, Dabo Swinney has agreed to a new contract. According to a report from Bruce Feldman, Swinney’s new deal worth $93 million over the next 10 years. Yes, as Feldman eloquently puts it, this is massive.

BREAKING: Dabo Swinney’s new deal at #Clemson is MASSIVE. It will be for 10 years and $93 million, per source … He has led the Tigers to two of the past three national titles.

The deal will pay Swinney $8.25 million in the first year of the contract; over the course of the deal, he will make an annual average of $9.3 million, including bonuses.

Swinney, now famously, took over the Clemson program on an interim basis in the middle of the 2008 since. Since then, he’s helped lift this program to newfound heights; the Tigers are now a college football superpower.

During his tenure, Clemson has gone 116-30, which translates to a win rate of 79.5 percent. After putting the cap on an undefeated 2018 season (15-0), the Tigers have eight straight seasons of 10+ wins. Clemson has participated in the College Football Playoff in four consecutive seasons, including three national title game appearances.

The ACC belongs to Clemson now, too; the Tigers have won the conference in four straight seasons (2015-18), and five total times under Swinney. Clemson is poised to continue rolling with another monster recruiting class, which ranks top 10 nationally.

Clemson has had 16 defensive linemen drafted in the Dabo Swinney era (since 2009 draft). Alabama has had 15 in the Nick Saban era (since 2008 draft).

Despite the exodus of talent, Dabo Swinney and Clemson will enter the 2019 season absolutely loaded, again. On offense, the Tigers return Trevor Lawrence, a Heisman Trophy candidate, at quarterback. He’s joined by a ridiculous bunch of skill position players: Travis Etienne, Justyn Ross and Tee Higgins.