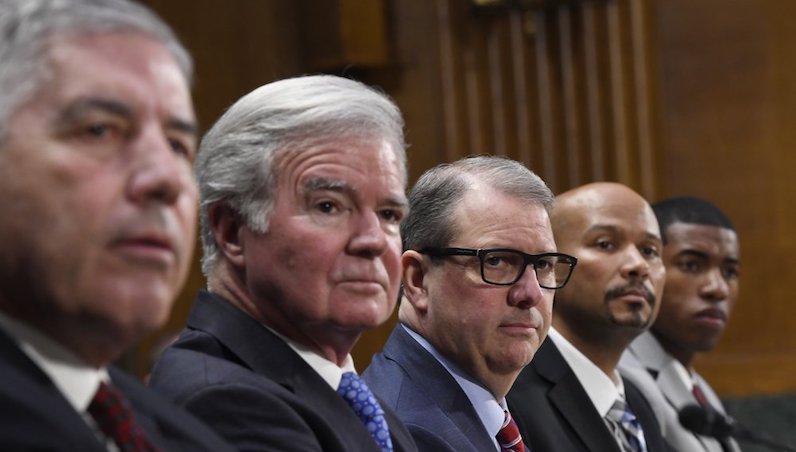 According to a report from Ralph Russo at the Associated Press, the NCAA will move closer to allowing Division I athletes to earn sponsorship and endorsement money — based off name, image and likeness (NIL). This new system could start as early as next year. The deals would be worked out on by the athletes, on their own.

These potential rule change will be reviewed this week by administrators before being sent to NCAA Board of Governors, which will meet April 27-28. As Russo notes in his report, the new rules would be wide-ranging.

If adopted, the rules would allow athletes to make sponsorship and endorsement deals with all kinds of companies and third parties, from car dealerships to concert promoters to pizza shops, according to a person who has reviewed the recommendations. The person spoke to The Associated Press on condition of anonymity Thursday because the details were still being discussed and debated.

This initiative is the work of a group created nearly a year ago, led by Gene Smith, Ohio State’s athletic director. The NCAA is looking to pass legislation — with these alterations as the foundation — for this to take effect in 2021.

The NCAA is moving closer to allowing Division I athletes to earn money from endorsements and sponsorship deals they can strike on their own as early as next year.

Under these new measures, athletes would be barred from wearing school-branded apparel. They would need to disclose financial terms of the deal. The NCAA would, in turn, develop a system to “evaluate potential deals for fair market value and spot possible corruption.” Athletes could risk the loss of their eligibility if they failed to properly release financial terms of the deals.

This announcement comes just one week after the NBA and the G League launched a new preps-to-pros development program. Jalen Green, one of the top prospects in the 2020 class, signed a contract that could be worth up to $500,000. The G League is already in the process of contacting 2021 prospects about this new initiative, too.

One way for NCAA basketball programs to combat the financial lure of the NBA G League pro path will be if the NIL rules are adjusted. The NCAA Council is expected to meet on it over next week.

"I think it's going to happen and will be a game changer," a source told @247Sports.

This wasn’t the only catalyst, though. Last fall, the state of California passed the Fair Pay To Play Act — a bill which made it illegal for the NCAA to forbid student-athletes to make on based off NIL. Several other states followed California, including proposals in North Carolina, Florida, Colorado and Kentucky.