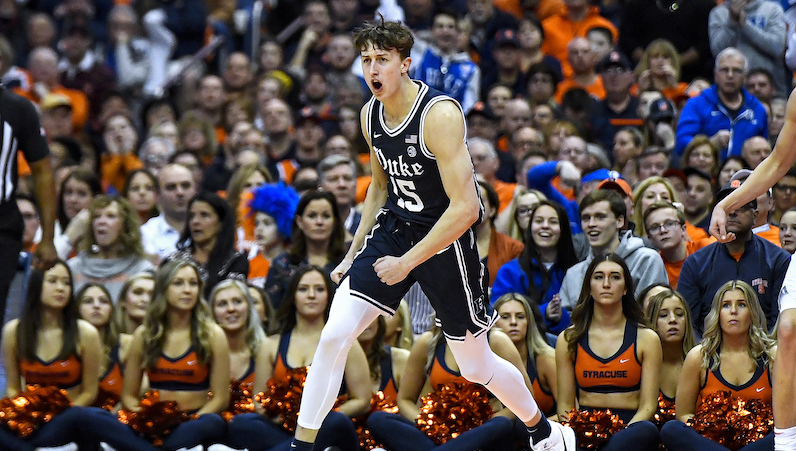 O’Connell is one of the names that floated as a possibility. It makes sense, too. Before his arrival at Duke, AOC was a 4-star prospect in the 2017 class. He played his prep basketball for Milton High, which is located about 40 minutes north of Tech’s campus in Atlanta.

It’s not just proximity that could play a role, though. Fit is important as well. O’Connell’s a shooter, which makes him an easier fit on a lot of rosters. While his shot slumped this season (27.3 3P%), AOC was a solid spot-up shooter: 36.1 percent on 3-point attempts. That could work wonders for a program that’s never shot above 32. percent on 3-point looks over a single seasons under Pastner.

The 2019-20 Yellow Jackets finished the season with an effective shooting mark of 49.8 percent — good for No. 157 nationally. Despite that middling ranking, this was easily the best perimeter shooting team at GT during Pastner’s tenure. In theory, AOC could help improve the team’s perimeter efficiency.

There’s still one thing that’s standing in the way here, though: O’Connell isn’t currently on track to be a graduate transfer. O’Connell could be forced to sit a year — unless the NCAA passes legislation that would afford players a one-time transfer exception. That policy could go into effect for the 2020-21 academic/athletic year. Per ESPN:

The working group is seeking feedback from Division I members through student-athlete representatives, conference offices, impacted coaches’ associations and other collegiate athletic professional organizations. The group will take that feedback into the council’s April meetings and according to the NCAA release, the group’s goal is to have the new criteria approved for transfer in the 2020-21 academic year.

(Of course: due to concerns with COVID-19, this scenario could certainly play out differently, for a variety of different factors.)

It should also be noted that O’Connell’s younger brother is a 3-star recruit in the 2020 class and has committed to Old Dominion: Brady O’Connell. The younger O’Connell plays prep basketball for the  Ravenscroft School (Raleigh, N.C.).

UPDATE (3/27): According to a tweet from Jon Rothstein, the NCAA is going through discussions pertaining to the timing of the transfer vote. This could be moved back from April to June.

Source: The NCAA is discussing moving the vote for immediate eligibility for transfers from April to June.