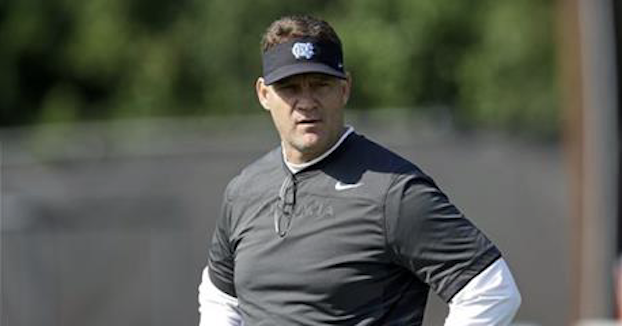 North Carolina was swift in finding its next defensive coordinator. On Friday, UNC parted ways with Jay Bateman and on Saturday reports began circulating that Gene Chizik had agreed to return to Chapel Hill as defensive coordinator. On Monday’s episode of ‘The Drive’ on WSJS, host Josh Graham explained why this is a great move for the Tar Heels. A proven track record, incoming talent, and a situation similar to Mack Brown’s in 2018 are all reasons to love the move. Hear the full segment or read the transcript below.

North Carolina found it’s new defensive coordinator. It seemed like this was very similar to what happened with Mack Brown. North Carolina made a decision on its coach, knowing who the replacement was going to be. How else could you justify such a quick turnaround happening? In Mack Brown’s case, Larry Fedora was fired officially on a Sunday.

So he was fired on a Sunday and on Monday morning, it was announced that Mack Brown was the new head coach in Chapel Hill. Looking at Gene Chizik, who’s now the DC. Gene Chizik was working with the SEC Network, kind of like Mack was working at ESPN, and a day after we learned Jay Bateman, no longer the DC in Chapel Hill, Gene Chizik announced (he’s) the guy. Probably around one or two o’clock in the afternoon on Saturday.

Charlton Warren is going to be the co-DC officially with Chizik. Chizik is the perfect hire here because North Carolina had this same exact situation play out in 2014. They had a lot of talent, but on defense seemed disorganized. Couldn’t get stops. Couldn’t really tackle anybody, allowed 70 points to ECU, 50 to Clemson, 50 to Notre Dame, 47, I think to Miami, 43 to Georgia Tech. And so they made a change. They had co-DCs, they let them both go. They brought in Gene Chizik and very quickly things turned around. North Carolina transformed and they were an 11-win football team in 2015.

So North Carolina figured rather than find somebody like Gene Chizik, how about we just hire Gene? So that’s what they’re doing here. And there’s a lot of talent on defense. It’s not like Chizik hasn’t been engaged, following college football. Like I said, he’s been working with the SEC Network the last couple of years. But you look at the defensive side of the ball: Travis Shaw, highest ranked recruit North Carolina has had in a generation from Greensboro on the defensive side of the ball.

Last year’s class, a top-15 class as well. Five of the top six players on the defensive side of the ball, including the Triad’s own Rara Dilworth. The year before that, Mack Brown’s first recruiting class, six of the top seven players —  you guessed it are on defense, including five-star Tony Grimes. So there’s talent littered all over the place for a guy like Gene Chizik.

And I like bringing in Charlton Warren, too, because he’s got SEC recruiting ties to the area. He’s been actually involved in recruiting kids over the last few years, unlike Chizik, who hasn’t had a coaching job since leaving Chapel Hill. And he was the defensive coordinator at Indiana just last year. So I like the pairing.

I think it was a home run decision by North Carolina to bring back Gene Chizik.

Can the ACC rebound next year?