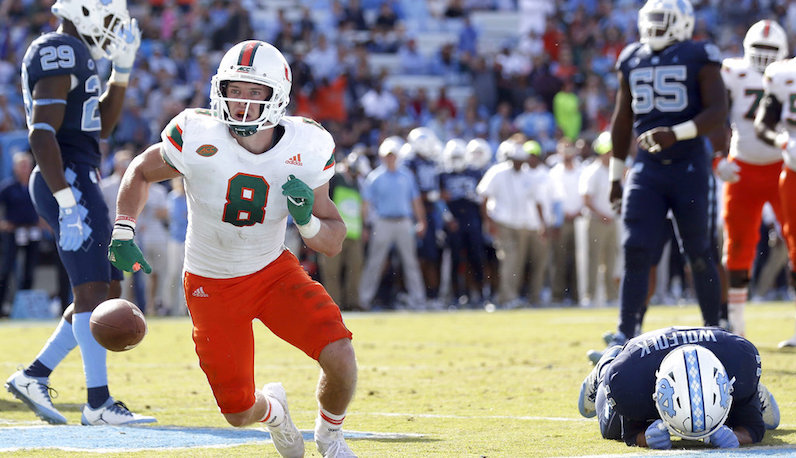 A pair of Atlantic Coast Conference football standouts were recognized for their equally impressive work in the classroom on Wednesday, as Miami wide receiver Braxton Berrios and Virginia linebacker Micah Kiser are among the 13 finalists for the 2017 William V. Campbell Trophy, presented by Fidelity Investments.

The Campbell Trophy, which is awarded by the National Football Foundation and prominently displayed at its official home inside the New York Athletic Club, recognizes an individual as the absolute best football scholar-athlete in the nation.

This marks the second consecutive year that two ACC student-athlete have been finalists for the NFF’s “Academic Heisman.” Duke’s DeVon Edwards and Wake Forest’s Ryan Janvion were recognized last season.

“Being named Campbell Trophy finalists is a tribute to Braxton and Micah’s consistent hard work and commitment throughout their college careers,” said ACC Commissioner John Swofford. “We are proud to see these two role models added to the list of ACC finalists for this prestigious award, and we look forward to celebrating their many accomplishments both on and off the field.”

The 13 finalists will each receive an $18,000 postgraduate scholarship as a member of the NFF National Scholar-Athlete Class, presented by Fidelity Investments. The finalists will travel to New York City for the 60th NFF Annual Awards Dinner on Dec. 5, where their accomplishments will be highlighted in front of one of the most powerful audiences in all of sports. One member of the class will be declared the winner of the 28th William V. Campbell Trophy and have his postgraduate scholarship increased to $25,000. The ceremony, which will take place at the New York Hilton Midtown, will be live streamed on ESPN3, starting at 8:30 p.m. ET.

Boasting a nearly perfect 3.96 GPA, Berrios is the leading receiver for undefeated and top 10-ranked Miami. His impressive resume earned his spot as the Hurricanes’ fourth NFF National Scholar-Athlete.

A two-time Academic All-District and Academic All-ACC selection, Berrios is on pace to graduate in December as a double major in finance and entrepreneurship. The 2015-16 Miami Scholar-Athlete of the Year also received the football team’s 2016 Mariutto Family Scholar-Athlete Award. A Dean’s List member every semester of his college career, Berrios earned President’s List honors three times and was named to the Provost’s Honor Roll seven times.

Berrios has 32 receptions this season for a team-high 415 yards and six touchdowns, and his 16.3 punt return average is the best in the ACC. He earned ACC Receiver of the Week honors after his multi-touchdown performance against rival Florida State on Oct. 7, which snapped Miami’s seven-game losing streak to the Seminoles.

Berrios has been a force on the field for the Hurricanes, playing wide receiver and returning punts. He has helped Miami reach three consecutive bowl games, including a win over West Virginia in the 2016 Russell Athletic Bowl in which he had 64 receiving yards and a touchdown. As a junior, Berrios finished 11th nationally in punt return average (11.3 yards) and was awarded the 2016 University of Miami Sports Hall of Fame Unsung Hero Award.

Off the field, Berrios is a two-time participant in the football team’s annual bone marrow drive. The Raleigh, North Carolina, native has visited Holtz Children’s Hospital and took part in the Hurricanes’ hospital visit during the 2015 Sun Bowl.

Kiser personifies the student-athlete ideal, having already earned his degree while claiming All-America accolades as one of the top defensive players in the nation. The two-year team captain becomes Virginia’s fifth NFF National Scholar-Athlete.

A 2016 second-team Academic All-American, Kiser graduated with a bachelor’s degree in foreign affairs in May 2017 while boasting a 3.42 GPA. The first-team Academic All-District selection is currently working toward his master’s in higher education. A Baltimore native, Kiser is a two-time Academic All-ACC selection and a three-time ACC Academic Honor Roll member.

A semifinalist for the 2017 Butkus Award, Kiser has recorded 79 tackles so far this season, and his 9.9 tackles per game place him second in the ACC, behind only teammate Quin Blanding, and tied for 12th in the nation. He leads Virginia and all ACC linebackers with five sacks and is tied for the team lead with seven tackles for loss in 2017. Earlier this season, Kiser was named the Walter Camp National Defensive Player of the Week, Lott IMPACT Trophy Player of the Week and ACC Linebacker of the Week after his game against Connecticut when he recorded 15 tackles, two sacks and recovered one fumble at Virginia’s own goal line.

A second-team All-American in 2016, Kiser was named a first-team All-ACC linebacker in 2015 and 2016. Only the sixth player since 1976 to lead the ACC in tackles per game in consecutive seasons, he recorded 9.8 as a sophomore and 11.2 as a junior, which ranked fourth in the nation. The two-time Touchdown Club of Richmond Linebacker of the Year currently sits 10th all-time in Cavaliers history with 19 career sacks, and he has recorded 345 total tackles while reaching double-digits in 18 games.

Kiser has had a profound impact on the community during his time at Virginia. Following the riots in Charlottesville earlier this year, he was solely responsible for uniting the football team and initiating the idea of taking a team photo in which the Cavaliers locked arms. His other activities include volunteering at the Boys and Girls Club, mentoring elementary school students and visiting sick children at area hospitals.

The ACC boasts three past Campbell Trophy winners among its current member institutions. Duke’s David Helton is the most recent, as he received the honor in 2014. Virginia’s Thomas Burns was recognized in 1993 and Miami’s Joaquin Gonzalez in 2001.

The trophy is named in honor of the late Bill Campbell, the former chairman of Intuit, a former player and head coach at Columbia University, and the 2004 recipient of the NFF’s Gold Medal. The award comes with a 25-pound bronze trophy and a $7,000 increase in postgraduate funds for a total scholarship of $25,000. A total distribution of $241,000 in scholarships will be awarded Dec. 5, pushing the program’s all-time distributions to more than $11.3 million.

Is point differential a big concern for undefeated Miami?