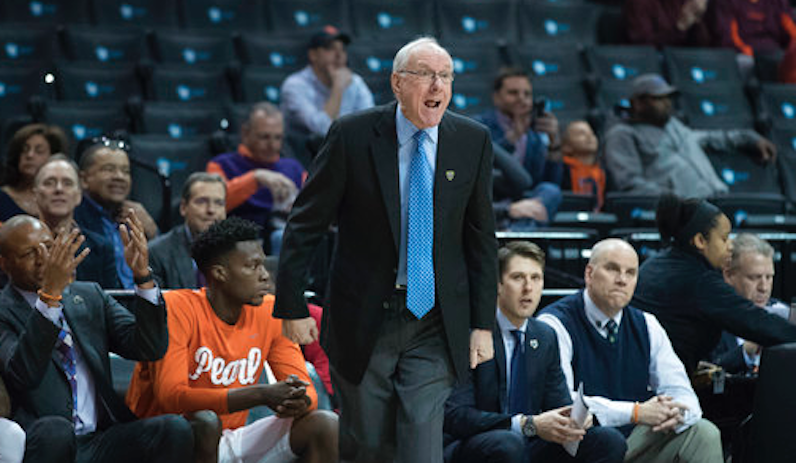 Jim Boeheim and Syracuse will not be playing in the NCAA tournament this year. (AP Photo)

Syracuse fans are disappointed this week after learning that the Orange won’t play in this year’s NCAA tournament. A series of nonconference losses held major sway in keeping Syracuse out of the Big Dance. Between Dec. 5 and Jan. 1, the Orange lost four games that negated a 10-8 ACC regular season.

First, Syracuse suffered a disappointing 52-50 setback to Connecticut in Madison Square Garden on Dec. 5. Then, Georgetown defeated the Orange, 78-71, on Dec. 17 in the Carrier Dome. On Dec. 21, Syracuse suffered a stunning 93-60 loss to St. John’s on its home floor. Finally, Boston College’s 96-81 win over the Orange ended the Eagles’ 20-game ACC losing streak.

Had Syracuse won those four games, it would have finished 22-10 overall and 11-7 in ACC play — more than enough to earn an NCAA tournament bid. But those four losses came against teams that finished with losing records. With RPIs of 106 (UConn), 113 (Georgetown), 123 (St. John’s) and 219 (Boston College), those teams dug the Orange’s grave.

One of the biggest arguments in favor of Syracuse making the tournament was that it won five games against teams that were selected. Only Providence won more among other schools on the bubble. But Syracuse’s record in such games was just 5-8 — simply not enough to sway the NCAA Selection Committee.

With a 2-11 road record, the Orange didn’t demonstrate that it was the same team away from the Carrier Dome. With a nonconference RPI of 188, Syracuse wasn’t competitive with peer schools in similar situations.

Between 1987 and 2016, only six schools with 14 losses earned at-large berths in the NCAA tournament. Four of those six occasions took place before 1992. In the last two decades, only Georgia in 2001 and Arizona in 2008 reached the NCAA tournament with 14 losses. This year, however, Vanderbilt became the first 15-loss school to land an at-large bid. Michigan State also snuck in with 14 defeats.

In recent days, Jim Boeheim’s controversial statements about Greensboro have garnered much attention. In an ironic twist, Boeheim now hopes Syracuse is up to the task against Wes Miller’s UNC Greensboro squad Tuesday night in its NIT opener.