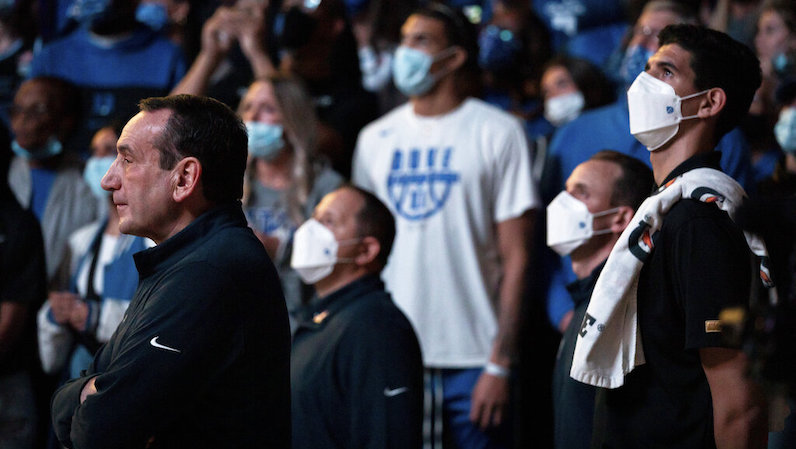 With only two months remaining in the regular season — including just eight more home games at Cameron Indoor Stadium — the farewell tour for Duke’s Mike Krzyyzewski is on the proverbial back nine. The Blue Devils (12-1, 2-0 ACC) are off to a great start. Duke returned to the floor earlier this week for the first time in two weeks — due to the holiday break and a pause of team activities with positive COVID-19 cases in the program.

As the clock continues to run down, we’ll go through a series of some of Krzyyzewski’s more memorable moments against each conference opponent: Coach K vs. The ACC.

To start things off, Duke will host Miami (4-o ACC), led by guards Isaiah Wong and Kam McGusty, on Saturday (Jan. 8) in Durham.

The 2012-13 Duke team wasn’t a vintage Duke team, nor was it a roster that was cut from the same one-and-done cloth that’s become synonymous with the program for the last decade. In fact, that’s one of the last Duke rosters before the switch fully flipped to one-and-done.

There was still plenty of talent on that squad, though, including two guys that still get minutes for Eastern Conference playoff contenders: Seth Curry and Mason Plumlee. A couple other players on that roster had at least a cup of coffee in the NBA, too, including current assistant coach Amile Jefferson.

However, the X-factor of that team was veteran stretch-forward Ryan Kelly. That’s right: The White Raven!

Earlier in the season, Kelly suffered a foot injury during Duke’s win over Clemson. Kelly would miss the next two months; during that time, Duke lost four games, all on the road, including a 27-point beatdown at Miami.

When Kelly finally returned in early March, though, it just so happened to be in a rematch with a Miami team that would go one to win the ACC in 2013.

Kelly’s return was a memorable affair. The 6-foot-11 senior went for a career-high 36 points in Cameron (March 2), while shooting 7-of-9 on his 3-point attempts. Duke won that night, 79-76; Kelly played 32 minutes. In those minutes, the Blue Devils outscored the Hurricanes by six points, according to Pivot Analysis.

Miami was led that night by star point guard Shane Larkin, who would go on to share ACC Player of the Year horns with Virginia Tech’s Erick Green. Larkin scored 25 points in defeat.