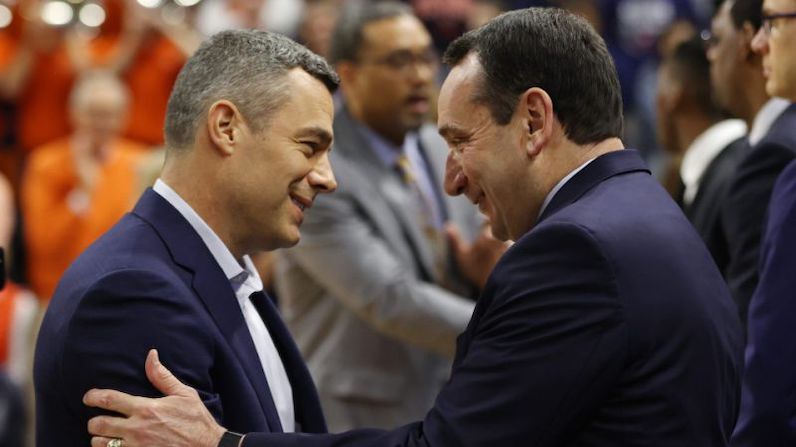 5-star guard Trevor Keels will announce his college decision next month. Keels took to Twitter to state the April 4 will be his decision day. This is the Sunday of the Final Four weekend.

Speaking of final fours, Keels, a 6-foot-5 shooting guard from Fairfax (Va.), is down to just a quartet of teams. Last September, Keels announced that he would choose between Duke, Virginia and Villanova. However, after Kentucky offered a scholarship in February, the Wildcats have joined the mix, too.

Duke is considered the slight favorite to land Keels, a consensus top-20 prospect in the 2021 class. Keels, who plays for Paul VI Catholic, was a prep teammate of Duke freshman point guard Jeremy Roach. Roach played in all 24 games this season for the Blue Devils: 8.7 points and 2.8 assists per game.

The Blue Devils already have two commitments from top-10 recruits in the 2021 class: power forward Paolo Banchero and small forward AJ Griffin. Banchero and Griffin are incredible prospects; both project as top-10 picks for the 2022 NBA Draft, too.

It’ll be interesting to keep an eye on Duke’s current roster. Roach is likely to return; however, NBA decisions are on the horizon for DJ Steward and Wendell Moore. Steward is undeniably gifted, but he had struggles this season as well. Given the unstable nature of his draft stock, it seems reasonable to assume that he’ll return for his sophomore season.

Steward’s return would be a huge boon for Duke; he’s a superb scorer. However, it could create a bit of a logjam in Duke’s backcourt, especially if Moore returns for his junior season. Moore is less of a prospect, but he’s a versatile wing from a power program; he’s on NBA radars.

If Roach is penciled in a the 1, Steward at the 2 and Moore at the 3, then Duke may have its starting perimeter rotation set. Of course, that’s subject to change. Steward could work as the team’s de facto point guard, while receiving playmaking help from Banchero, Griffin and Moore. At this point, Steward is more suited for a combo guard role — some on-ball creation but also plenty of off-ball movement, too.

Virginia has only one 2021 signee in its class: 4-star shooting guard Taine Murray.

UVA is also set to return guards Kihei Clark and Reece Beekman, one of the league’s rising stars. Keels, however, could fit in nicely as the team’s third perimeter option.

Matthew Hurt must get ready for NBA Draft decision