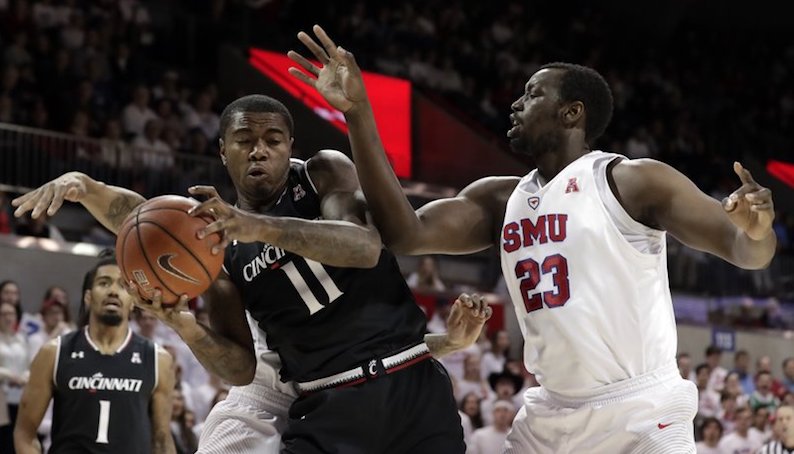 While at SMU, Akoy Agau (23) competes with Gary Clark of Cincinnati for a rebound. (AP Photo)

Agau arrives in Louisville by way of SMU, and before that: Georgetown. However, this is a reunion of sorts, because prior to landing at Georgetown: Agau played at Louisville. In fact, the 6-foot-8 forward was a part of Louisville 2013 recruiting class, which also featured Terry Rozier (Scary Terry!) — the first to arrive after the program’s national title.

A few months before he could take the floor for Georgetown, Agau tore his ACL, which cost him the 2015-16 season. After the 2016-17 season — 32 games, eight starts for Agau at Georgetown — he went south to Texas: SMU.

While playing for a Shake Milton-led SMU team in rebuild mode — after sending Sterling Brown and Semi Ojeleye to the NBA — Akoy Agau helped the mustangs win 17 games. Agau made nine starts, and appeared in 27 games; he shot 51.2 percent from the field and posted an offensive rebound rate just under 10 percent, which is solid.

For a team that could have depth issues next season, there are some good players in the frontcourt. After redshirting last season, 6-foot-11 UConn transfer Steven Enoch is eligible to play. Plus, the program also returns two talented sophomores: stretchy Malik Williams and Jordan Nwora (5.7 points, 43.9 3P%).

Of course, there’s also Dwayne Sutton — a favorite of ours at the ACC Analytics page — who can float between three different positions, and spend some time as a small-ball 4. Losing guys like Ray Spalding and Deng Adel to the pros is tough; however, Mack has talent and experience for his squad next season.