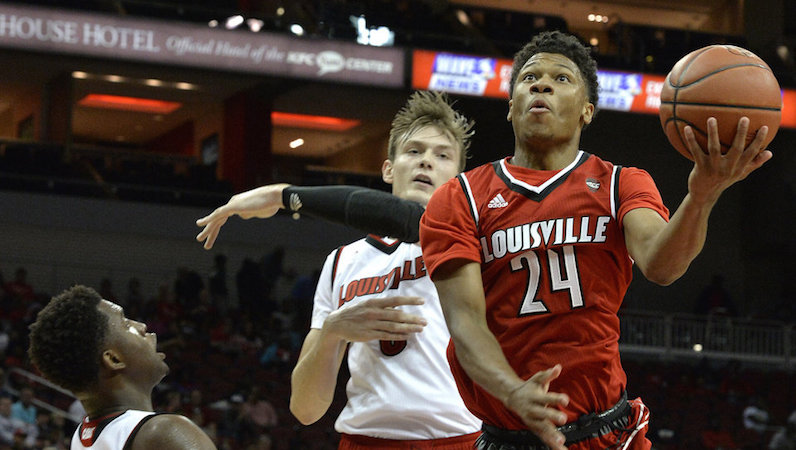 Dwayne Sutton has the ability to be an impact player for Louisville in 2017-18.

The Cardinals’ best player, Donovan Mitchell, has decided to test the NBA Draft waters. Mitchell, a first-team All-ACC guard in 2017, projects as a first-round pick but could return to school. Sophomore small forward Deng Adel, an emerging offensive talent, followed suit, too. Graduate transfer Tony Hicks will depart after using up his eligibility.

If Mitchell and Adel return, the majority of Louisville’s guard and wing rotation is set. However, if one or both of those guys stay in the draft, then there will be a lot of minutes and possessions up for grabs.

Sutton, despite being a walk-on, has an opportunity to crack into the rotation.

A Saturday up in the mountains…spent indoors

Allow me to editorialize for a moment, please. Last February, I got a rare Saturday off and decided to take a trip up to Asheville, N.C. I went there to hike and eat fancy grilled cheese sandwiches, but my inner basketball junkie would not allow me to stay away from Kimmel Arena when I heard UNC Asheville was hosting Cliff Ellis and Coastal Carolina that afternoon.

Sutton and fellow freshman Dylan Smith — who transferred to Arizona following the 2016 season — starred that day. Sutton scored 24 points as Asheville poured in 50 points in the second half and nearly pulled-off a stunning comeback victory over the Chanticleers.

Ever since that day, though, Sutton has been on my radar, and I will not be surprised to see him carve out a niche in Louisville’s rotation. The soon-to-be redshirt sophomore has a lot to offer.

The Cardinals have become known under Rick Pitino for a ferocious defense that forces turnovers and leads to fast breaks. Louisville, however, had issues in its transition offense this season. According to Synergy Sports, the Cards shot just 47.7 percent (tied for last in the ACC) and scored 0.97 points per possession in transition. Only Georgia Tech was less efficient in its transition offense.

On the opposite end of the spectrum, Virginia shot 64.3 percent and scored 1.29 points per possession in transition, according to Synergy.

Sutton can help in this department. As a freshman at Asheville in 2015-16, he shot just a shade under 62 percent in transition and scored 1.14 points per possession, which ranked 20th in the Big South.

He stands at 6-5, but Sutton is a rugged rebounder, too. According to KenPom, he posted a defensive rebounding rate of 19.7 percent — one of the 250 best percentages in the nation. On the whole, Sutton averaged 12 points per game as a Bulldog and scored double-figure points in 22 of 34 games.

Sutton could also force his way on to the court with an improved jump shot. While at Asheville, Sutton launched 2.1 three-pointers per game and connected on 31.4 percent of his triples. He shot just 28 percent on guarded catch-and-shots in 2015-16, per Synergy.

Louisville was not exactly bereft of perimeter shooting in 2016-17. Mitchell, Adel and Quentin Snider shot at least 35 percent from deep this season, which is pretty good. However, the Cardinals were streaky in this department. Too much was left on Mitchell’s plate to create something out of nothing. This is another area where Sutton could earn playing time, too.