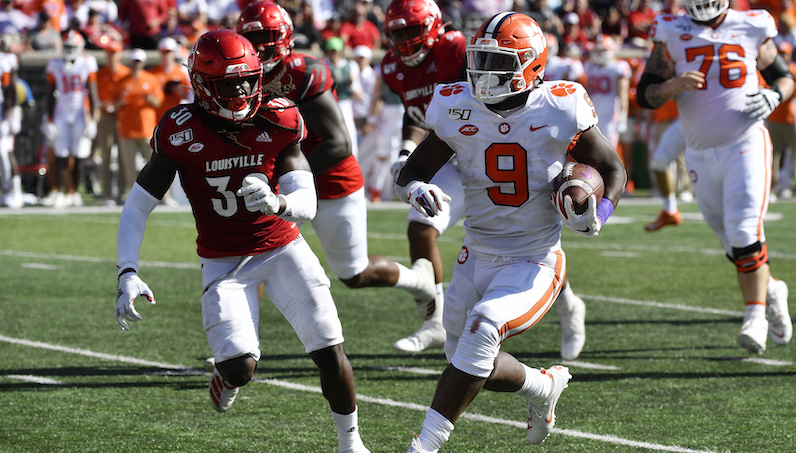 Clemson running back Travis Etienne (9) runs from the pursuit of Louisville defensive back Khane Pass (30) during the second half of an NCAA college football game in Louisville, Ky., Saturday, Oct. 19, 2019. Clemson won 45-10. (AP Photo/Timothy D. Easley)

After another wild weekend of ACC Football action, this week’s AP Top 25 Poll is out. There are two teams from the ACC in the top 25: Clemson and Wake Forest. After a road win at Louisville, Clemson (7-0) drops to No. 4 in this week’s poll — usurped by Ohio State.

Wake Forest (6-1) fell out of the poll for one week; however, after a home win over Florida State on Saturday night, the Demon Deacons are back in the AP Top 25, ranked No. 25.

POLL ALERT: Ohio State jumps Clemson to No. 3 behind Alabama, LSU in AP Top 25 presented by @askRegions; all five SEC teams in poll are in top 10.

Clemson and Wake Forest are scheduled to play against one another in a few short weeks, too. The Tigers hosts the Deacons on Nov. 16.

Outside of Clemson and Wake Forest, two other ACC teams — both in the Coastal Division — received votes as well: Virginia (29) and Pittsburgh (17).

Read More on ACC Football and the AP Top 25