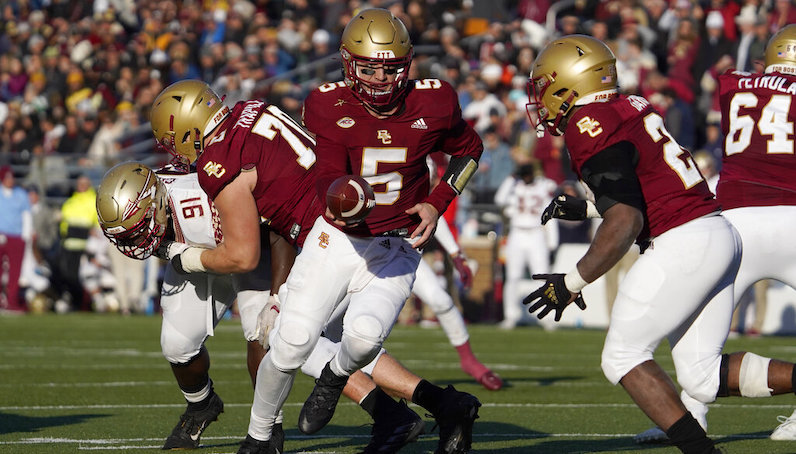 Boston College quarterback Phil Jurkovec (5) looks to hand the ball off to running back Pat Garwo III (24) during the second half of an NCAA college football game against Florida State, Saturday, Nov. 20, 2021, in Boston. (AP Photo/Mary Schwalm)

Earlier this week, Boston College football coach Jeff Hafley revealed that 15 of his players are dealing with flu-like symptoms. Hafley didn’t name the players. Currently, the status of those players — who extend across multiple position groups — is unknown for Saturday’s matchup with Wake Forest.

Jeff Hafley announced today that 15 players on the team have been hit with flu like symptoms. Their status is unknown for Saturday's game against Wake Foresthttps://t.co/11B7FD86JI

If Wake Forest is able to win Saturday at Boston College, the Demon Deacons will claim the Atlantic Division. However, if the Deacs lose, that could open the door for either NC State or Clemson to come out of the Atlantic and play Pittsburgh for the ACC title.

NC State hosts North Carolina in Raleigh: kickoff is set for 7 p.m. on Friday. If NC State wins on Friday, and Wake Forest loses on Saturday, then the Wolfpack win the Atlantic.

Clemson is done with its conference slate. The Tigers are on the road to play vs. rival South Carolina, with a 7:30 p.m. kick on Saturday. If both NC State and Wake Forest lose, Clemson will win the Atlantic.