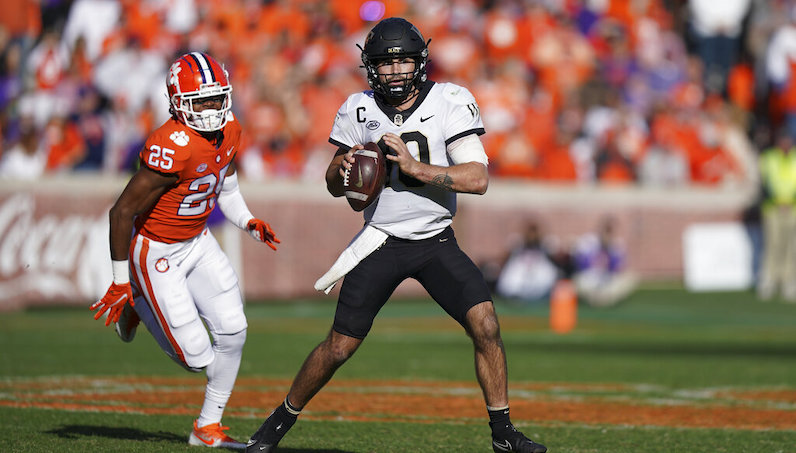 As Wake Forest gets set to play Boston College this weekend up in Chestnut Hill, the stakes have never been higher for the Demon Deacons. Or, well, they’ve been this high before; however, 2006 was a long time ago. You get what I mean!

If Dave Clawson and the Deacs defeat the Eagles, then they win the Atlantic Division; a matchup with Pittsburgh in the ACC title game awaits. However, if Wake Forest falls, then the door is open for either NC State — home vs. UNC — or Clemson.

The Demon Deacons let go of a great opportunity at Clemson on Saturday; however, Wake Forest still controls its own destiny for a division title.

Call it a hunch: there are a lot of new Boston College fans in Raleigh and Clemson, starting this week.

With a Coastal Division title hanging in the balance, Addison had arguably the best individual performance by an ACC receiver this season, although UNC’s Josh Downs may take some offense to that claim.

Jordan Addison is the first Pittsburgh player with 200 receiving yards and 4 reception TD in a game over the last 100 years. pic.twitter.com/YwwBweeCd8

Addison caught 14 balls for 202 yards and four touchdowns against Virginia. He was named a Biletnikoff Award semifinalist recently and — given he leads the nation in receiving touchdowns (15) — he will likely remain in the mix when finalists are announced this week.

After a slow start, the Wolfpack made quick work of Syracuse on Saturday, beginning in the second quarter. NC State scored 28 points in the second 15 minutes of action; the Pack cruised to victory, 41-17. Bam Knight took another kickoff back for a touchdown — his second this season.

Now, all of the program’s attention turns to a very intriguing rivalry game vs. North Carolina and (likely) Sam Howell.

It’s been a struggle for Clemson, especially on offense, this season. Despite those issues, the Tigers still have a shot at the Atlantic Division.

It was the Malik Cunningham Show vs. Duke last week. Louisville’s star quarterback threw for 303 yards and ran for 224 yards as the Cardinals destroyed the Blue Devils, 62-22.

Only the 2nd player in NCAA history with 300+ Passing Yds & 200+ Rushing Yds in a game…@MalikMalikc10!!!#GoCards pic.twitter.com/F2xujZZ2qW

As this season plays out, it’ll be interesting to see how UNC’s quarterback depth develops, especially if Howell opts out of a bowl game.

No. 8, Tied: Miami and Florida State

I know it’s been a disappointing season for the Hurricanes, but freshman quarterback Tyler Van Dyke had another monster performance for Miami. TVD threw for 357 yards and three touchdowns during the win over Virginia Tech.

Van Dyke now has five straight games with 315+ passing yards and at least three touchdown passes. This is something to build on, perhaps.

Mike Norvell has a chance to pick up his sixth victory of the season when FSU matches up with a Florida program that’s currently in a state of disrepair.

After two straight wins, Boston College crashed back to Earth on Saturday. Phil Jurkovec struggled and lost the quarterback battle to Jordan Travis.

In the first game of the Post-Fuente era, Virginia Tech fell on the road at Miami. As Virginia Tech continues its search to replace Justin Fuente, another item is on the horizon: handling its business vs. Virginia.

Take it away, Sean Tucker.

We lost Saturday, NC St 41 Syr 17. I'm pleased with my performance but not happy with the outcome. With just 13 Att for 105 Yds and TD there was so much more I could have done. One more game one more win. Cuse fans let's pack the house this Saturday! I'm still in the fight.. pic.twitter.com/fYTNkx1fbE

Georgia Tech heads into the matchup with Georgia as a 35-point underdog. The Yellow Jackets are the only thing standing in the way of a perfect regular season for the the Bulldogs.

So, are we sure we actually have to play this game?

The writing is seemingly on the wall in Durham: this could very well be David Cutcliffe’s last game as Duke’s head coach.