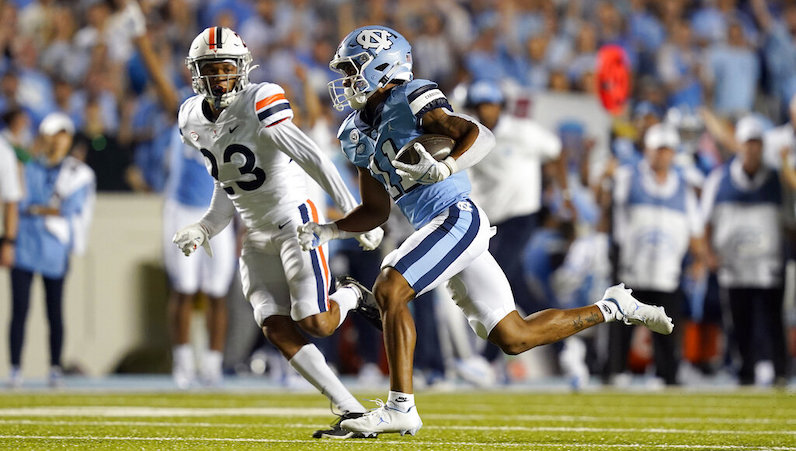 It’s been an up-and-down 2021 season for North Carolina, but week in and week out: Josh Downs has delivered.

With an incredible amount of skill production gone to the NFL, Downs stepped into a massive role this season; he’s made the most of the opportunity, too.

Entering the penultimate game of the regular season, Downs leads the ACC with 82 receptions (No. 3 in the FBS), 8.2 receptions per game and 1,109 receiving yards (No. 6 in the FBS). He’s well ahead of his next closes competition: Duke’s Jake Bobo is second in the ACC with 72 receptions — in 11 games.

Downs is one of three ACC receivers with over 1,000 yards receiving; however, he’s the only pass-catcher to eclipse the 1,100-yard mark. Pitt’s Jordan Addison and Dontayvion Wicks of Virginia are the ACC’s two other 1,000-yard receivers, currently.

This is a massive jump for Downs, who caught only seven passes — including three for touchdowns — in the 2020 season.

The single-season records for touchdown catches and receiving yards were both set by Hakeem Nicks in the 2008 season: 12 touchdowns and 1,222 yards.

At this rate, Downs can absolutely catch Switzer from a receptions standpoint, assuming UNC plays three more games this season. He should also usurp Nicks’ single-season yards record. Downs already knocked down the program record for receptions in a season by a sophomore. This, too, was previously held by Nicks: 74 in the 2007 season.

Downs is only the fourth UNC receiver in program history to go over 1,110 yards in one season, although Dyami Brown was very close last year (1,099 yards).

During the 2021 season, it’s been pretty incredible to see just how large of a share Downs has accounted for in terms of North Carolina’s pass game.

Josh Downs, WR – 2023
Downs has come in in the absence of Dyami Brown and Dazz Newsome. The clear alpha for UNC, he’s secured 8 or more targets in all but one game. He’s dynamic and a top 5 WR easily.

Downs has nine games this season with 8+ receptions. That’s five more than the next closest ACC receiver: Virginia’s Billy Kemp and Keytaon Thompson each have four.

Going back to the 2000 ACC season, this is the highest number of games with 8+ receptions. Pitt’s Maurice Ffrench ranks second with eight games of 8+ catches.

Poll: What should QB Howell do following the 2021 season?