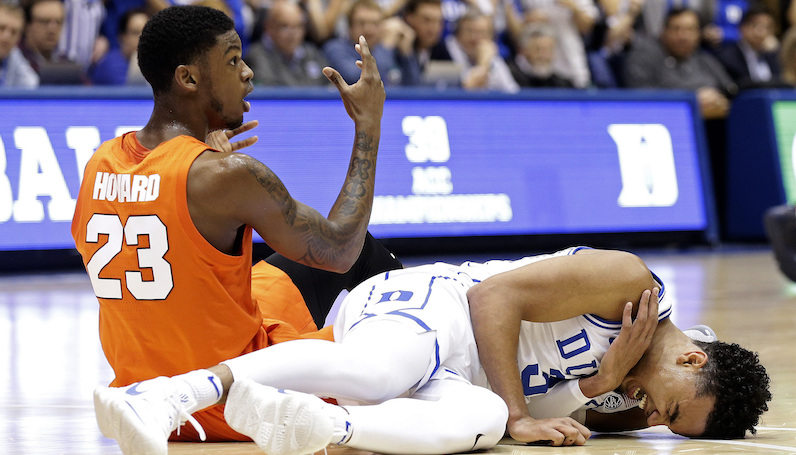 Duke's Tre Jones (3) grimaces after colliding with Syracuse's Frank Howard (23) during the first half of an NCAA college basketball game in Durham, N.C., Monday, Jan. 14, 2019. Jones was injured on the play and left the court. No. 1-for-now Duke will have to figure out how to play without perhaps its most irreplaceable player now that point guard Tre Jones is out indefinitely with a shoulder injury. (AP Photo/Gerry Broome)

It’s Friday and time for the weekend. But before that, let’s take a look at what’s going on around the ACC, including Dewan Hernandez updates, Gunter Brewer back in the ACC and good news for Tre Jones and Duke.

If you heard a collectively sigh of relief coming from the 919 area code yesterday around 3 p.m., this is why. Duke coach Mike Krzyzewski told Dana O’Neil of The Athletic that injured point guard Tre Jones, one of the top players in America, will return to the lineup sooner rather than later.

Jones will not play on Saturday against Virginia, but his injury isn’t as bad as some had initially feared.

Earlier this week, Miami submitted paperwork to the student-athlete reinstatement committee; this came after an NCAA decision on Monday upheld two previous decisions regarding Dewan Hernandez and rules violations. The issues of ineligible center on Hernandez’s relationship with Christian Dawkins, one of the three guilty defendants from last fall’s college basketball corruption trial.

It appeared as if a final decision could have landed on Thursday (Jan. 17); however, that wasn’t the case. Now there’s a chance, according to Michelle Kaufman of the Miami Herald, that Hernadez could get word on Friday.

On a recent episode of ESPN’s The Jump, NBA legend Scottie Pippen suggested his belief that Zion Williamson — the almost certain No. 1 pick in this year’s NBA Draft — should shut down his college career and get ready for the draft in June.

Tracy McGrady and @ScottiePippen don’t agree on whether Zion Williamson is the best player on his Duke team – but regardless, they both think he should stop playing NCAA ball right now, to eliminate the risk of injury before the draft. pic.twitter.com/7Egu42FjfJ

It could also be argued that Williamson has showcased so much skill and unique versatility that it almost doesn’t matter what happens between now and June; he’s going to be the top pick, even if he suffered an injury. That said, there’s still risk, and with the NBA rookie wage scale, there’s a difference — an opportunity cost — in millions of dollars in not going No. 1.

A former UNC assistant coach under Larry Fedora, Gunter Brewer, will head to Louisville. New coach Scott Satterfield has completed his staff with the hire of Brewer as receivers coach.

Prior to his one season with the Philadelphia Eagles, Brewer coached for six seasons in Chapel Hill with Fedora. He coached at UNC last decade, too; Brewer was a part of staffs for Carl Torbush and John Bunting (2000-04).