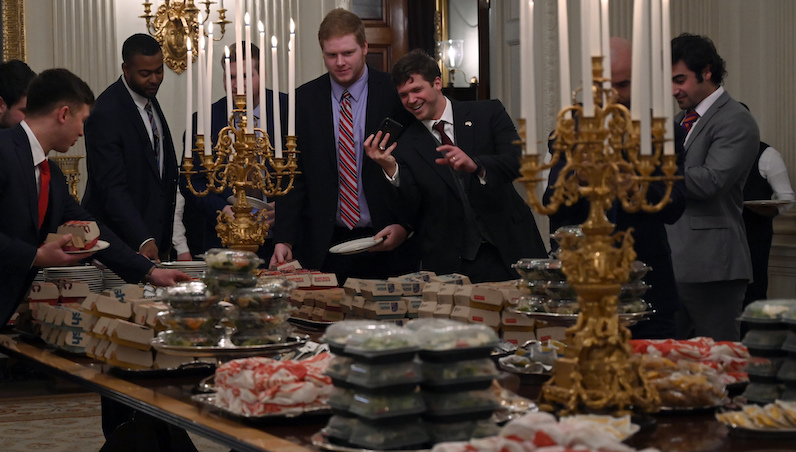 Starting with a wacky and strange night at Cameron Indoor Stadium, a lot happened in the ACC on Monday. Let’s get you caught up.

In truly cruel twist of fate, Duke freshman point guard Tre Jones suffered a shoulder injury early in the first half of No. 1 Duke’s overtime upset loss to Syracuse. While going for a loose ball, after stripping Syracuse center Paschal Chukwu, Jones collided with a diving Frank Howard. He suffered an AC joint separation. His timetable for a return is unclear.

Also from this game: star wing Cam Reddish — fresh off an excellent performance at FSU — missed the Syracuse game due to an illness. He went through some of pre-game warmups, but was unable to play.

If the Jeff Capel and the Panthers were disappointed after a near-upset of NC State on Saturday, it certainly didn’t show on Monday night. Two days later, Pitt pulled off another impressive home victory — defeating No. 11 Florida State, 75-62.

Trey McGowens — one of Pitt’s exciting young perimeter players — gets the game ball: 30 points (18-19 FTA), seven rebounds, four assists and five steals. This is his fourth 30-point game of the season, and his second in the last week; he also hung 33 points in the win over Louisville.

Clemson football goes to the White House and gets fed…fast food?

In one of the strangest things I’ve seen in some time, Clemson football — only a week after winning the national title — visited the White House. Now, that’s not extraordinary; however, what is bizarre is what was on the menu.

Trump shows off the fast food spread the White House brought out for the Clemson players.

There was Burger King, McDonalds, Wendy's and Dominos. No sign of Chik-Fil-A, Krispy Kreme or Chipotle. pic.twitter.com/ZKibdeKVkt

Due to the partial government shutdown, White House chefs are currently at home. So instead of a prepared meal, President Trump bought Clemson a giant fast foot spread. Apparently there are no other actual restaurants or catering companies in the Washington D.C. area, either.

I don’t know…everything is so very weird, man.

On Monday, an NCAA committee concluded to uphold two previous decisions: Miami’s Dewan Hernandez remains ineligible. This is due to his relationship with Christian Dawkins.

As Michelle Kauffman from the Miami Herald reports, though, there’s still a shot that Hernandez could see the floor for the Hurricanes in 2019 — although that hope continues to dwindle.

According to his attorney, Jason Setchens, Hernandez has one more chance to have the decision overturned. He and the school will file paperwork to the student-athlete reinstatement committee and hope to get an answer before Saturday’s noon home game against against No. 13 North Carolina.

Jim Boeheim is like Mick Jagger — he gets better with age. Syracuse looked deader than Fredo Corleone on Saturday against Georgia Tech. Tonight, it won at Duke. Amazing.