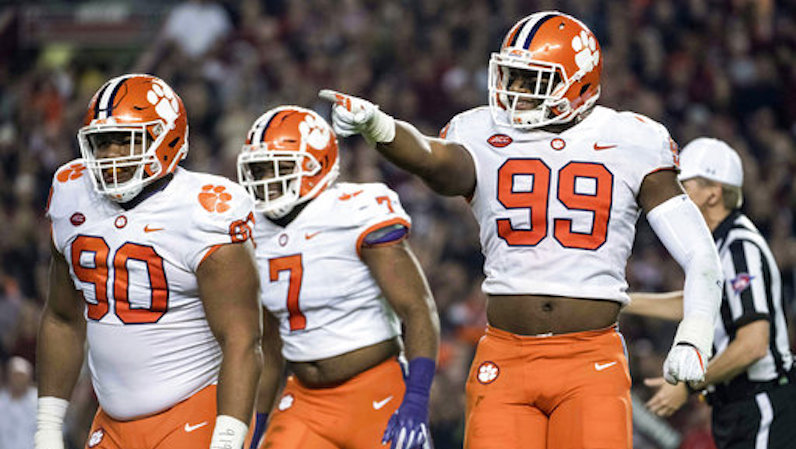 Clemson defensive end Clelin Ferrell (99), Dexter Lawrence (90) and Austin Bryant (7) celebrate after a sack in the first half of an NCAA college football game against South Carolina in Columbia, S.C. The secret to Clemson retaining its stellar defensive line is not that mysterious, Tigers coach Dabo Swinney says: Expected first-rounders Christian Wilkins, Clelin Ferrell and Austin Bryant did not get the grades they anticipated from the NFL committee evaluating their draft chances. (AP Photo/Sean Rayford, File)

Love, along with Clemson defensive end Clelin Ferrell, Wisconsin linebacker T.J. Edwards and Utah kicker Matt Gay, were the only players who made first team All-American after last season and first team to start this season. Love ran for 2,118 yards and 8.05 per carry last season and was second to Baker Mayfield in the Heisman Trophy voting.

Oliver was a second-team All-American last year after being first team as a freshman in 2016.

Clemson Football starts the season ranked No. 2, behind Alabama