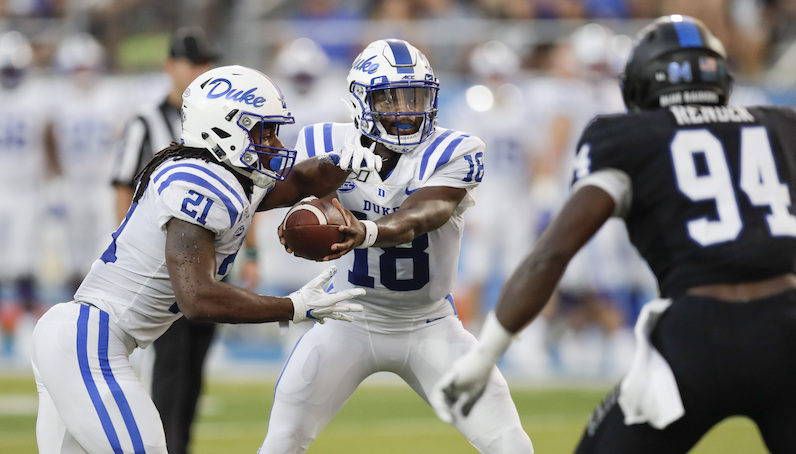 Would you like to know the complete list of FBS quarterbacks this season with 700 passing yards, 10 passing touchdowns and 300 yards rushing? Sure, of course you do. It’s not a long list; in fact, there are only two names on it: Oklahoma’s Jalen Hurts, the latest Lincoln Riley-inspired sensation, and Quentin Harris of Duke.

Through the first four games of Duke’s season, Harris has electrified: 842 passing yards, 10 touchdowns, 303 rushing yards and two more rushing scores. Harris has just two interceptions to his name, too, both of which came against Alabama.

He’s completed 72.9 percent of his passes; however, since the Alabama game, Harris has gone 74-of-96 (77.1 percent) through the air — with 10 touchdowns and no interceptions. He’s averaged a solid 7.8 yards per pass attempt in that three-game stretch, too.

Harris has also been aided by an offensive line that’s really done a nice job in pass protection. Duke has allowed just one sack so far this season — courtesy of Alabama star Terrell Lewis. The Blue Devils are one of three teams in 2019 — along with Georgia and run-happy Air Force — that have given up fewer than two sacks.

After three seasons of sitting behind Daniel Jones, Harris has quickly made a name for himself, with the help of head coach David Cutcliffe. While the defense has led the way (No. 16 in defensive efficiency), Duke’s offense’s has been solid as well (No. 39 in efficiency).

The Blue Devils rank third in the ACC in scoring offense (33.5 points per game) and fifth in third-down conversation rate (42.9 percent).

However, there’s unfortunate news involving running back Brittain Brown — who will likely miss the rest of the season with a shoulder injury. According to Steve Wiseman of the News & Observer, Brown re-aggravated the injury last Friday against Virginia Tech:

Brown has played for just 42 snaps over three games this season while dealing with his injured shoulder. He ran the ball twice for 13 years last Friday in Duke’s 45-10 win at Virginia Tech. He re-injured his shoulder while being tackled on the second run and didn’t return to the game.

Without Brown, more will fall on the shoulders of Harris, who seems up for the challenge. Deon Jackson — 232 rushing yards on a team-high 54 carries — and Mateo Durant (122 rushing yards) will need to step up, too.

Duke up to No. 4 in this week’s ACC Football Power Rankings