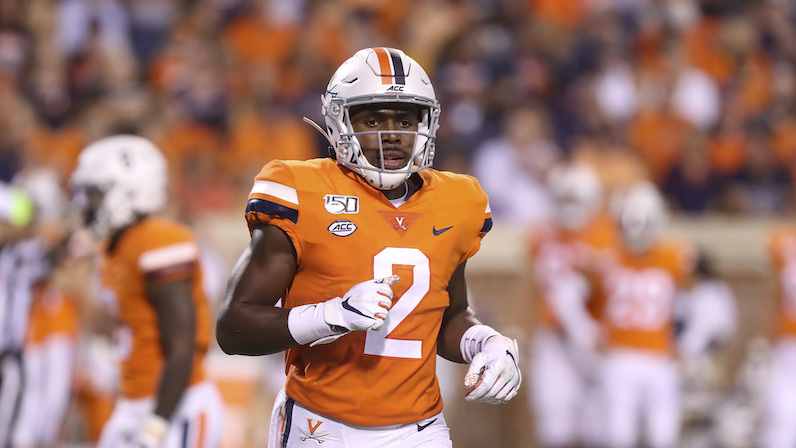 One of the primary questions surrounding Virginia Football in 2019 centered on the offense: Who could replace the efficient, high-volume production (93 receptions on 132 targets in 2018) of Olamide Zaccheaus? At the top of the list was senior Joe Reed, a do-it-all talent who has been in Charlottesville for every step of the Bronco Mendenhall era.

It’s been a, well, not-so-great start to the 2019 season for the ACC, as a whole. However, Virginia, through three games, has lived up to its preseason billing as the favorite to win the Coastal Division. Led by Bryce Perkins, the Cavaliers are 3-0 with two ACC wins already in hand. For the second week in a row, Virginia (No. 30 in ESPN’s FPI) ranks inside the AP Top 25, too.

Pros:
– OL did a fantastic job for damn near the whole night
– Love 18 touches for #21
– Overcame deficit with added pressure from hype

Cons:
– Tackling
– Too much time in pocket (until last few drives)
– Refs

Virginia’s defense — which ranks No. 22 in the FBS in efficiency, per ESPN — is quite good, on all three levels. But as the Cavaliers continue to move through their schedule, Perkins and Reed — along with running back Wayne Taulapapa — must continue to pace Virginia’s offense.

Through the first three games of the season, Reed already has more targets — 25, per StatBroadcast — than he did all of last season — 23. On those 25 targets, Reed has 19 receptions (No. 5 in the ACC), which translates to a catch rate of 76 percent, for 175 yards. He’s averaging 9.2 yards per reception and seven yards per target.

That volume isn’t quite the same level of volume as Zaccheaus, and his average yards per catch/target are low, but it’s a similar catch rate.

Despite the electricity of Perkins, Virginia’s offense isn’t super explosive; the Cavaliers have just 12 plays of 20+ yards from scrimmage this season, tied for 10th in the ACC. They’ve dominated time of possession (No. 1 in the ACC), though, and Reed — featured heavily in the quick passing game — is a big part of that.

So far this season, Reed has just two grabs of 15 or more yards; with his speed, however, it’s not like Reed can’t get behind the secondary and make plays way down the the field.

Virginia likes to line Reed up all over the field, but he’s especially dangerous out of the slot or backfield. Back during the Week 1 win at Pittsburgh, Reed also may an early submission for Catch of the Year in the ACC.

About halfway through Virginia’s 52-17 home win over William & Mary, Reed made a house call. The veteran return man took a kickoff back 100 yards for a touchdown. This marked the third straight season now that Reed has returned a kickoff for a touchdown. A natural game-breaker, Reed has four career kickoff returns for touchdowns.

The sample is small and greatly influenced by that one 100-yard return; however, Reed currently ranks fifth in the FBS and No. 1 in the ACC with an average of 45.8 yards per return.

Going back to the 2016 season, when Reed first stepped on the pitch for UVA, only seven FBS players, including Reed, have returned at least four kickoffs for touchdown in that window of time (2016-19).

Currently, Reed is one of only three FBS players — so far in the 2019 season — with two or more touchdown catches and a kickoff return score as well.

There was all kinds of excitement as then-No. 25 Virginia got set to host Florida State last Saturday night. The game, in primetime on ESPN, brought out the largest home crowd at Scott Stadium since 2015.

Virginia had just entered the AP Poll for only the second time since the 2011 season. A loss here would’ve dropped UVA from the poll

My dude’s finger is looking kinda heavy. Good catching up w the champ and the legend @kylejguy5 … Now let’s go get this win! #Hoos pic.twitter.com/tEMxYCOQEL

It was a busy night for Reed, too, unsurprisingly. Reed was targeted 10 times in the passing game — good for eight receptions, 83 yards and a touchdown. While his pre-snap position is different, Reed’s 12-yard touchdown catch came on a wheel route — just like his 40-yard touchdown against William & Mary. This is also just an incredible pass from Perkins.

Reed has six fourth quarter receptions on the season now, which is tied for third in the ACC.

Of course, this wasn’t all Reed did, though. While the majority of Virginia’s run game is centered around Taulapapa pounding the rock, the speed of Perkins and how those two interact in the RPO game, the Cavs found a creative way to get Reed a carry, too. This was one of the plays that triggered Virginia’s game-winning touchdown drive.

UVA can’t look past ODU; however, on the other side of that matchup, Virginia has back-to-back road dates at No. 7 Notre Dame and Miami on a Friday night. There’s a bye week in between, but those will be huge games for Mendenhall and UVA. Don’t let Miami’s 1-2 record fool you; this team is pretty good, and that outcome could go a long way in determining who wins the Coastal in 2019.