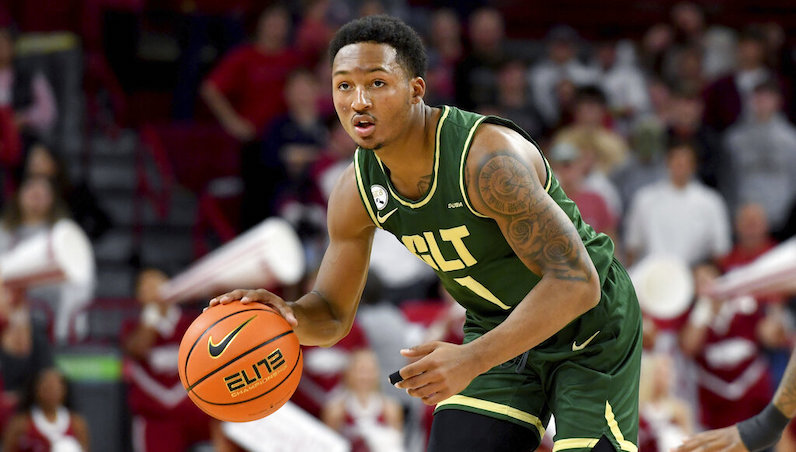 Jahmir Young, one of the top scoring guards in the country, is on the move. After three seasons with Ron Sanchez at Charlotte, the 6-foot-1 point guard will enter the NCAA transfer portal and go through the NBA Draft process.

During his time with Charlotte, Young was a three-year starter: 85 games, 85 starts. He posted career averages of 16.7 points, 5.4 rebounds and 3.0 assists per game. Young’s also a 35-percent career 3-point shooter, on good volume (5.0 3PA game). He was twice named First Team All-Conference USA.

Moreover, Young is an elite foul shooter, which is an indicator of skill: 89.2 percent from the line this season. Among qualified shooters, this percentage ranked No. 27 nationally, per KenPom.

According to Synergy Sports, Young scored 0.78 points per pick-and-roll possession this season (42.6 eFG%). He was even more dynamic shooting or attacking off the catch, though: 1.03 points per spot-up possession (49.5 eFG%).

Aly Khalifa, a 6-foot-11 center, led Charlotte’s roster with an assist rate of 28.0 percent. The 49ers runs a lot of their offense from the elbow, with frontcourt initiation, or other various 5-out looks.

Here’s Elbow action from the 49ers. Young starts the possession with an entry pass to the elbow, then runs into a little corner split action and drains the 3.

Young was second on the team: 23.3 percent, a career-best mark.

Along with Toldeo’s Ryan Rollins, Young was one of only seven Division I players to finish the season with 25 percent usage, 15 percent defensive rebound rate, 20 percent assist rate and 80 percent shooting from the free throw line.

Toledo sophomore Ryan Rollins – a rising prospect – is declaring for the 2022 NBA Draft and hiring an agent: “I look up to CJ McCollum…guys who come from mid-majors.” pic.twitter.com/rVIHzxqr0h

Throughout the 2021-22 season, Young had big games vs. strong competition. Young went toe-to-toe with Alondes Williams, scoring 27 points as Charlotte lost to Wake Forest 82-79. During a December meeting with Arkansas, Young scored 10 points and dished out five assists. When Charlotte fell at home to Davidson in late November, Young posted 10 points and four assists.

Assuming Young elects to return to college basketball, there should be plenty of suitors; he’s an accomplished scorer and a very good shooter. Those shooting capabilities, and the ability to play off the ball, make him a fit in a variety of contexts.

Wake Forest has needs at the guard positions and is familiar with Young. Steve Forbes showed that he’s more than willing to empower his talented playmakers to be themselves, which must appeal to recruits and transfers.

Young hails from Upper Marlboro, Maryland. He played his final two seasons of prep basketball at DeMatha Catholic. Put those two things together, Mike Brey and Notre Dame seem like a fit, too. Even if Prentiss Hubb returns for his fifth season of college basketball, Notre Dame showed it could blend multiple playmakers with its continuity ball screen offense this year.

With Blake Wesley headed to the NBA Draft, the Irish could use an offensive boost in the backcourt — even with the arrival of JJ Starling.

During his prep career, Young played at DeMatha with Hunter Dickinson, Earl Timberlake and Justin Moore. Back in the 1970s, Brey played for the legendary Morgan Wooten at DeMatha.

Not too far from Charlotte, the Clemson Tigers will need to fill some big backcourt shoes; both Nick Honor and Al-Amir Dawes are in the transfer portal, too.

Wake Forest is also nearby. With Alondes Williams headed to the NBA Draft, the Demon Deacons could also use some added backcourt scoring and shooting.

Clemson and Georgia Tech both run offenses with a lot of offensive initiation from the elbow and high-post, which is similar to Charlotte. Young could see a level of comfort and familiarity with those types of systems. However, Young could also look for an offense that’ll flatten things out and run more spread pick-and-roll.