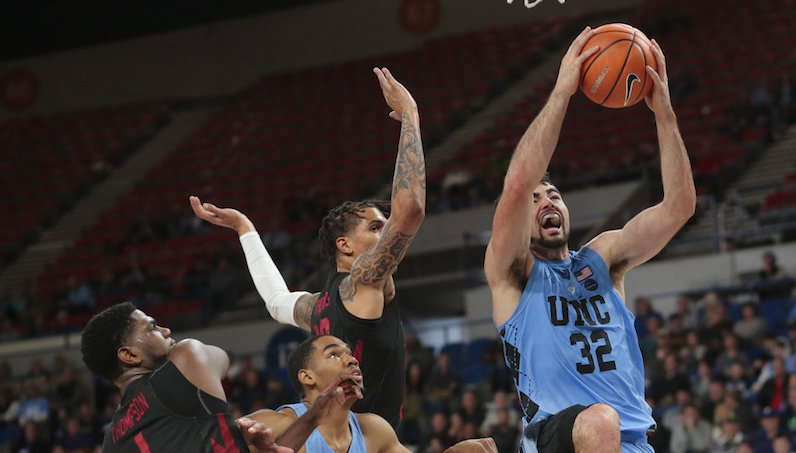 North Carolina had plenty of issues on the offensive side of the floor in its defeat against Michigan State. The Tar Heels suffered the worst shooting performance in program history against the Spartans — KenPom’s No. 4 defense.

No player was immune to tossing up bricks for UNC on Sunday night, which went 1-of-18 from beyond the arc. According to Sports Reference, this was just the sixth time this season a team has attempted at least 15 three-pointers, and made one or fewer.

However, the possession type North Carolina ran the most against Sparty was a post-up; according to Synergy Sports, the Heels used 17 possessions via post-ups. Here’s why — at the moment — that’s a challenge for Luke Maye and UNC’s offense.

A strong interior game has long been a component of Roy Williams’ offenses at North Carolina. The 2017 title team was an offensive rebounding juggernaut that also shot 47.2 percent on post-ups, per Synergy — 0.85 points per possession, No. 7 in the ACC.

Luke Maye is off to an excellent start as a junior. The 6-foot-7 forward is averaging 19 points on 53 percent shooting, and a monster usage rate of 25.7 percent. Maye, however, was bothered by the length of Michigan State’s defense, which features several future NBA players.

Post-ups have been a bit of a challenge for Maye, and the rest of the Tar Heels this season, though. According to Synergy, 13.2 percent of North Carolina’s possessions are post-ups. That ranks 22nd in all Division I basketball in terms of frequency; it’s also the highest number in the ACC.

On those possessions, UNC is shooting just 31.1 percent, and scoring 0.57 points per possession — second worst in the ACC. The Tar Heels have also turned the ball over on a quarter of its post-ups — a big increase over 2016-17 (13.7 percent).

Luke Maye accounts for the greatest share of UNC’s post-ups, too. Maye has 37.5 percent of the team’s post-ups, per Synergy. He’s shot 36.8 percent on these type of possessions, and has scored 0.67 points per possession. Maye has experienced much better fortune as a cutter and spotting up.

That’s not great, but the freshmen have had greater issues. Garrison Brooks, Sterling Manley and Brandon Huffman are a combined 7-of-23 (30.4 percent) on post-ups, according to Synergy. The trio, which looked sluggish against MSU’s grizzled frontcout, have scored 0.51 points per possession on post-ups.

UNC isn’t going to stop playing through the post; it’s a tenant of the offense. However, when Cameron Johnson returns to the active lineup, the Heels will add another spacing agent to the rotation. This should hopefully open up the middle of the floor a little more. In turn, that will help Maye and the rookies.

Additionally: Brooks, Huffman and Manley will get better as the season goes along. The Tar Heels could also flash a little more versatility with Johnson. Pinson has already spent some time as the team’s nominal four; Johnson should allow UNC to flex out a little bit more, too. If that’s the case, then North Carolina can get to some four-around-one sets that open up the lane as well.