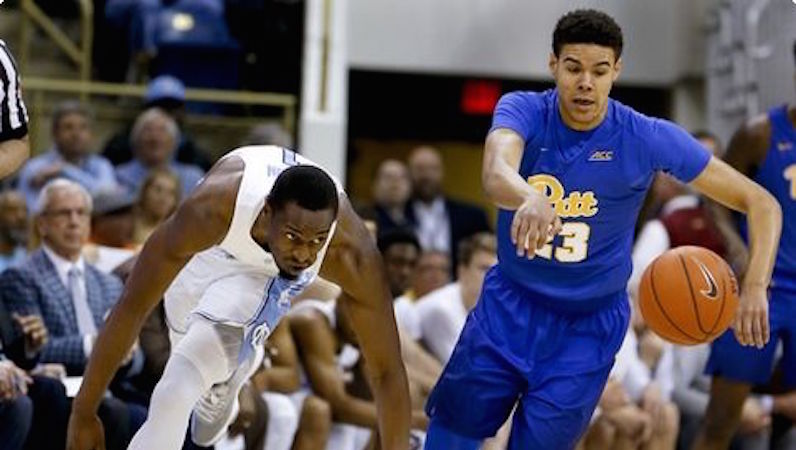 Last month, Cam Johnson announced that he would transfer out of Pitt. Despite being just a sophomore, Johnson is a graduate transfer, which means he’s eligible to play in the 2017-18 season. He’s a mulitpositional long-range shooting threat, and demand for those types of players will always be high.

It didn’t take long for North Carolina — after missing out on 5-star forward Kevin Knox — to express interest in Johnson. Pitt is restricting Johnson’s transfer to UNC, and any other ACC program, which drew the angst of Jay Bilas, among others.

Johnson can transfer within the league but would be forced to sit out a year. Here’s why a team like the Tar Heels would be disappointed to miss out on Johnson for the 2017-18 season.

Johnson was one of the premier catch-and-shoot options in the ACC this season. Over 66 percent of his field-goal attempts were of the three-point variety; he connected on 41.7 percent of his treys, which ranked No. 176 in the nation, per KenPom.com.

According to Synergy Sports, Johnson shot 40.3 percent on catch-and-shoot opportunities in 2016-17. He scored 1.2 points per possession, which ranked No. 9 in the conference among players with at least 100 catch-and-shoot possessions — right behind Duke’s Luke Kennard.

Johnson sniped at this highly accurate clip despite playing in an offense that lacked a true slash-and-kick creator. Michael Young and Jamel Artis were both individual offensive hubs, and Artis served admirably as the team’s de facto point guard. However, imagine what Johnson could do spacing the floor next to one of the best point guards in America, Joel Berry, and Theo Pinson, one of the ACC’s top secondary creators.

It’s supremely valuable to have that kind of shooting on the floor. There’s a reason why Johnson ranked No. 7 in the ACC in offensive rating: 123 points per 100 possessions. He was one of just two perimeter players in the league to land inside the top 10 of this metric — Kennard being the other. The departure of Justin Jackson’s shooting leaves a void on North Carolina’s perimeter; Johnson could be a serious boon.

If you want to play for Roy Williams, you better be ready to play some daggum defense. Johnson is a legitimate 6-7; he has the wingspan and athleticism to defend multiple positions in college basketball. He looks the part of the archetypal 3-and-D wing.

Pittsburgh was a disaster on defense this past season; the Panthers ranked No. 159 in adjusted defensive efficiency, according to KenPom. That wasn’t exactly Johnson’s fault, though. Per Sports Reference, Johnson contributed one defensive point per 100 possessions above a league-average player.

Johnson can dig in and guard in the post, too. Per Synergy, Johnson held opponents to 25 percent shooting on post-ups as a sophomore.

More than just a shooter

Johnson has a floor game, too, which adds to his appeal. During his sophomore season, he dished out 2.3 assists per game (third on the roster) and assisted on 14.4 percent of his teammates’ made field goals when he was on the court.

He isn’t a breakdown playmaker; you wouldn’t just throw the ball to Johnson and have him create offense. However, he can go to work against a warped defense — action is run one way, then the ball gets skipped back to the weak side. That’s where Johnson can get clever. According to Synergy Sports, the Panthers scored 0.94 points per possession when Johnson was a shooter or passer in pick-and-rolls.