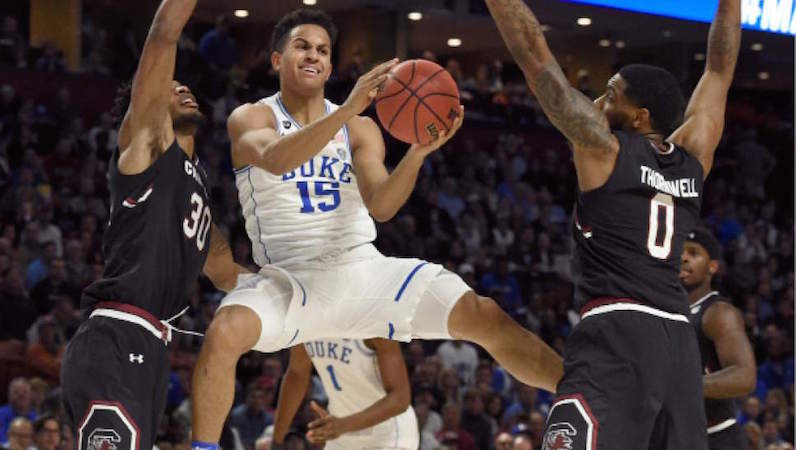 Frank Jackson emerged as one of the best pick-and-roll scorers in the nation as a freshman. (AP Photo)

We are in the silly season of college basketball as underclassmen are busy testing the NBA Draft process. At the same time, the final remaining top-100 recruits are making their college decisions.

There is nothing wrong with either set of prospects seeking intel and considering their options. However, what happens in this period of misdirection and misinformation can be a preamble to a cautionary tale for fans who are already eager to turn the page to The Next Big Thing.

“You put your name in to cover your bases potentially on what happens with Trevon Duval and who he commits to,” Goodman said. “If he commits to Duke, then the ball is probably going to be in his hands.”

First off, Frank Jackson is a ridiculously good basketball player. In fact, Jackson was one of the best players in the ACC this season. Duke fans should be thrilled if he stays in Durham for another year.

If it had not been lost amid the hysteria — Grayson Allen hot takes, Jayson Tatum’s (deserving) hype and the team’s overwhelming expectations — more people would recognize just how efficient Jackson was as just a freshman.

Everyone can look at the season box score for Duke and see that Jackson shot 39 percent on three-pointers and 47.3 percent overall from the field. That gives us the outline of a good shooter, right? Yes, it does. However, it is what we can analyze in between the numbers that shines even brighter.

According to Synergy Sports, Jackson shot 37.4 percent on catch-and-shoot opportunities. He has a good, repeatable shooting motion, too. There is room for this number to jump even higher. In total, Jackson connected on nearly 39 percent of his jump shots, which ranks in the 85th percentile nationally. That is the baseline, and it is already pretty high.

What really jumps out, though, is his ability to shoot off the bounce. The best scoring point guards in the world — Stephen Curry, Kemba Walker, Damian Lillard, Kyrie Irving — are all exceptional at shooting the ball off a dribble. If you are not an extraterrestrial built like Russell Westbrook, this is how players become elite scorers from the point guard position. Jackson, per Synergy, shot 41.5 percent (No. 9 in the ACC) and scored 1.05 points per possession on jumpers off the dribble.

There were 39 players in the ACC this year who shot at least 40 jumpers off the dribble. Of this group, Jackson ranked fifth in points per possession — better than Dennis Smith Jr., Jayson Tatum, Donovan Mitchell and Jonathan Isaac. All of those players will be first-round draft picks this year.

We harped on it last November: If the floor is spread, Jackson is darn near unstoppable in the pick-and-roll. Just ask Michigan State and its defensive mastermind Tom Izzo; the Spartans were reduced to rubble as Duke blitzed MSU with a barrage of PNR wizardry.

Frank Jackson has a fiesty crossover dribble, and if he catches a defender leaning one way, he is only so happy to speed off in the other direction.

As a freshman, he shot a scorching 55.2 percent as a ball-handler in pick-and-rolls, according to Synergy Sports, which ranked No. 18 in Division I basketball. Again, think about him shooting off the dribble here; if you go under the screen, splash, it is a jumper in the defender’s face. If the defense tries to fight through the screen or switch, then that is Jackson’s opportunity to dart toward the hoop. According to Synergy, he scored 1.1 points per possession — which was good for No. 9 in the nation last season.

He is an explosive leaper and a fearless finisher at the rim, too. Per Synergy, Jackson shot better than 57 percent on non-post-ups possessions around the basket. He can get even better here, too. Jackson drew a shooting foul on 9.7 percent of his pick-and-roll possessions. According to KenPom, Jackson drew four fouls per 40 minutes. With more possessions at his disposal, he has a path to more easy points.

With the confirmed departure of Donovan Mitchell, Frank Jackson — if he returns — could be the best breakdown guard in the ACC next season.

Areas for growth: Defense and playmaking

The biggest flaw of this year’s Duke team came on the defensive end. The Blue Devils finished the season outside the top 45 nationally in points allowed per possession, according to KenPom.com.

KenPom has tracked this data since the 2001-02 season. No team has ever finished outside of the top 25 in defensive efficiency and won the national championship. Think back to Duke’s last game of the season; the Blue Devils simply could not stop a mediocre South Carolina offense. Duke allowed better than 1.1 points per possession and gave up 65 (!) second-half points.

Dribble penetration was a major area of concern, and Jackson was one of the many culprits in allowing too much of this. He has a tendency to drift, and that can be a challenge when having to climb through a barrage of screens.

Frank Jackson assisted on only 12.6 percent of his teammates’ made field goals while on the floor. But when he was a passer in pick-and-rolls, Duke players shot 47 percent after receiving the ball from him.

If he decides to return for his sophomore season in Durham, Jackson has the ability to become a first-team All-ACC performer. His skill set is the ideal fit for Duke’s motion offense.

So be careful what you wish for, Duke fans. Trevon Duval looks like a future star, but Jackson flashed the ability to dominate a college basketball game — and he is only beginning to scratch the surface.