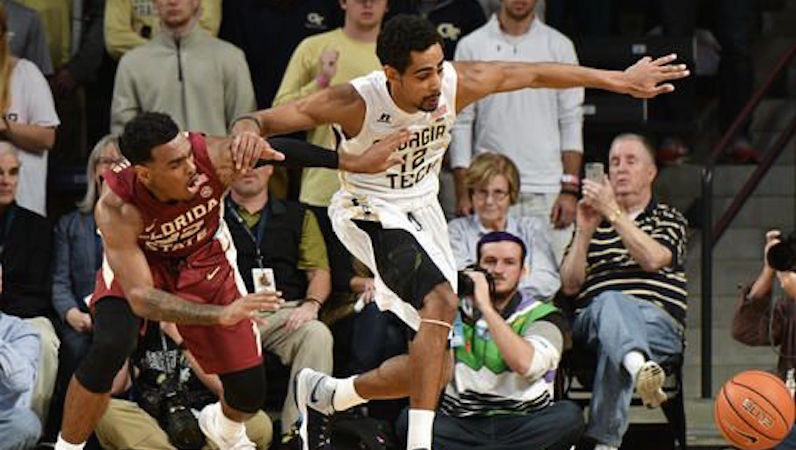 The Sunshine State will be on full display Friday when No. 3 seed Florida State takes on Florida Gulf Coast in Orlando.

Obviously, FSU will be a heavy favorite come the end of this week, but point guard play will be important for both sides. Remember, as we have seen in the past, FGCU is capable of springing an upset in March Madness. (‘Sup, Georgetown?)

Florida Gulf Coast, led by star guard Brandon Goodwin, wants to score from inside the arc; that is where this team is at its best. Per KenPom, the Eagles shoot 55.5 percent on two-point field goals, which ranks 14th in the country. On the season, 57.5 percent of Dunk City’s total points have come on two-pointers. Only 10 teams score more points inside the arc than FGCU, according to KenPom.

Fortunately for Florida State fans, the Seminoles are darn good at complicating matters for opponents the closer they are to the basket. FSU is the second-tallest team in America with an average height of a little over 6-6. The Noles carry a 12-man rotation, which is a tad excessive and allows Leonard Hamilton the luxury of constantly throwing waves of long-limbed defenders at opponents.

Jonathan Isaac (6-10), Jarquez Smith (6-9), Michael Ojo (7-1) and Chris Koumadje (7-4) all recorded block rates above six percent this season. Koumadje leads the way in this department; according to KenPom, the sophomore blocks 11.6 percent of the two-point field goals attempted while he is on the floor.

The matchup to watch will be the battle of the two speed merchant point guards. Xavier Rathan-Mayes has successfully rebranded his game as a junior. The Canadian has gone from unconscious gunner to floor general with a scoring touch. The transformation has been rather impressive to watch, too. XRM shoots less frequently but more efficiently now. As a freshman, he launched 12-plus shots in 18 of 32 games. This season, however, that has happened just five times in 33 games. He is also shooting a career-best 33 percent on threes.

XRM’s ability to run pick-and-roll has been a major boon for the Seminoles. Per Synergy Sports, Florida State scores 1.28 points per possession when Rathan-Mayes is a passer on pick-and-rolls. This is good for second in the ACC among players with at least 40 ball-handling possessions. FSU shoots 61.3 percent following a pass from Rathan-Mayes. This helped XRM post a career-high assist rate of 29.3 percent.

His hands will be full against the Eagles, though: Goodwin, the Atlantic Sun Newcomer of the Year, presents a sizable challenge. The Central Florida transfer who was first-team all-conference paces an offense that finds ways to score efficiently in transition. The Eagles not want a track meet — according to KenPom, they averaged a shade under 65 possessions per game — but when they get out in the open floor, they can be dominant.

Florida State has been solid in transition defense this season, which is a positive. Per Synergy, Hamilton’s crew allowed just 0.93 points per possession in transition this season. That is good for 41st in the nation.

If Florida State contains Goodwin and defeats Dunk City, then the Seminoles will move on to face off with the winner of Maryland-Xavier.