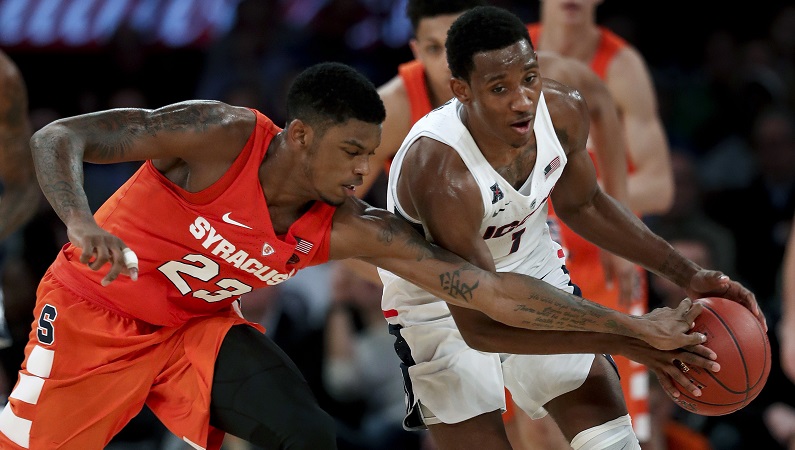 Despite an early December setback to Kansas, Syracuse has passed all the other tests on its early season schedule. The Orange are off to an 8-1 start heading into an old Big East rivalry battle with Georgetown Dec. 16 in Washington, D.C.. What have been the keys to Syracuse’s solid start, and what are some things the Orange need to improve upon before ACC play begins?

Syracuse is one of just two ACC schools – Duke being the other – to average more than 15 offensive rebounds per game. Syracuse’s solid work on the offensive boards is one reason why the Orange rank second in the ACC, behind only Virginia, in rebounds allowed to opposing teams (30 per game). Syracuse’s dominance of the offensive glass helped the Orange win eight of their first nine games despite being the ACC’s worst 3-point shooting club in non-conference play.

The Orange lead the ACC in steals, and are the only team in the league averaging better than nine per contest. Frank Howard and Tyus Battle both rank in the top ten individually in the ACC in steals. All of Syracuse’s top eight players in terms of minutes have at least six steals on the season. Syracuse’s ability to disrupt opposing offenses and force turnovers is a big reason why the Orange rank third in the ACC in defensive points allowed – just 61.7 per game.

Battle, Syracuse’s sophomore phenom, is one of just two ACC players – the other being Duke freshman Marvin Bagley – to average better than 20 points per game. He’s been the heart and soul of the Orange offense – the team’s leader in field goals, 3-pointers, and second in free throws. He’s also been active around the perimeter defensively, ranking in the top ten in the ACC in steals. After questioning whether or not he should return to Syracuse for his sophomore year, Battle has been a first-team All-ACC player through the first third of the season.

Through nine games, the Orange ranked 12th the ACC in scoring, averaging just 72.2 points per game. The Orange are relying heavily on three scorers – Tyus Battle, Frank Howard, and Oshae Brissett. Between them, the trio is averaging 49 of Syracuse’s 72.2 points per outing. For the Orange to maximize their offensive potential, they need more scoring production out of players like Paschal Chukwu and Marek Dolezaj. Chuwku and Dolezaj each average over 22 minutes per game, but are combining to average just 10.1 points. The Orange also need Geno Thorpe to step up after making just four of his first 14 attempts from 3-point range in a Syracuse uniform.

Syracuse hasn’t shot very well out of the gate as a team. Heading into mid-December, the Orange rank 14th out of 15 ACC teams with a 44.1 percent shooting average. Syracuse ranks dead last in the ACC in 3-pointers, averaging just 5.2 made shots per contest from long range, as well as 3-point percentage. Shooting just 28.5 percent from 3-point range simply won’t cut it for Syracuse once they get into ACC regular season play.

Syracuse has been one of the ACC’s weaker teams in terms of assists, ranking near the bottom of the league in that particular category. One player – Frank Howard – had 54 of Syracuse’s 114 total assists through nine games. Only two others – Tyus Battle and Marek Dolezaj – were in double digits in assists. For the Orange to improve their outside shooting and overall offensive efficiency, they need to work the ball around the perimeter more effectively.