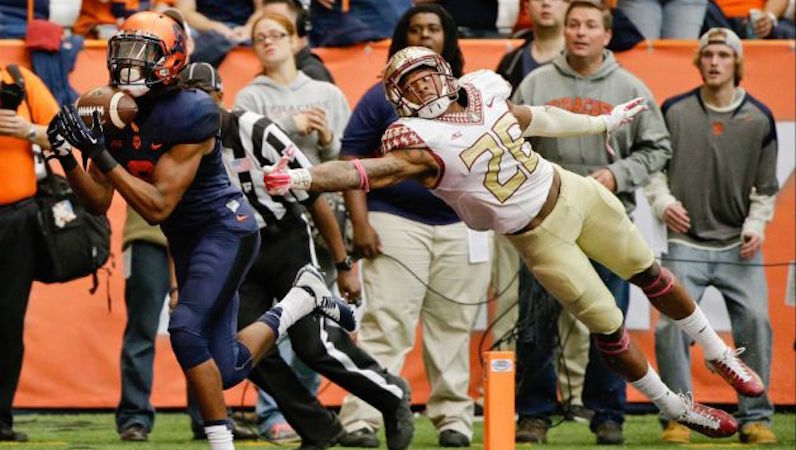 Amba Etta-Tawo was the big breakout star of Dino Babers’ debut season at Syracuse. The Maryland transfer was arguably the best receiver in the ACC in 2016; he was certainly the most productive. Etta-Tawo led the conference in receiving yards (1,482) and touchdowns (14). His departure to the NFL will free up opportunities for a variety of players, including senior wideout Steve Ishmael.

Syracuse targeted Etta-Tawo 131 times last season, according to Football Study Hall, which translates to nearly 11 targets per game. The Orange is not going to slow down on offense, and the team will not stop slinging the ball around the yard.

It is most likely that a couple of players will combine to absorb that production, including Ervin Phillips, who caught 90 passes a season ago. Steve Ishmael, however, could also be due for a big senior season.

According to Football Study Hall, Ishmael was the third-most targeted receiver on the roster last season; Syracuse quarterbacks threw in the direction of the 6-2 pass-catcher 63 times (13.8 percent of their total attempts). He managed to haul in 48 of those targets for receptions, which translates to a ridiculously efficient catch rate of 76.2 percent.

It is no secret: Syracuse’s offense relies on a lot of quick, short passes. These are the types of routes that have a better chance of completion (again, no duh). Hence why four players on Syracuse’s roster had at least 55 targets and catch rates above 71 percent.

This is where Ishmael can distance himself, though. Ishmael, per Football Study Hall, averaged 11.7 yards per catch and 8.9 yards per target — both of which were second on the team to the All-ACC Etta-Tawo.

Ishmael was able to blend efficiency and explosiveness in 2016; he recorded 12 receptions of 15-plus yards and six receptions of 25-plus yards, per cfbstats.com. Ishmael produced 20 first-down receptions last season, too, which means nearly 42 percent of his total catches moved the chains.

The Orange will need a higher dosage of this in 2017.

Whether you believe in basic red-zone metrics or not, this is an area of the field where Syracuse needs to see improvement. The Orange have to do a better job converting on scoring opportunities. According to cfbstats.com, Syracuse scored just 29 red-zone touchdowns (2.4 per game) last season — the lowest total in the ACC. To drive that point home a little further: Syracuse’s rapid-fire passing attack scored just 1.36 isolated points per pass, which ranked No. 104 nationally, per Football Study Hall.

Making matters trickier for the Orange in 2017: Etta-Tawo led the team with six red-zone touchdowns last season, according to NCAA Savant. That weapon is now gone.

Ishmael caught 10 touchdown in his first two seasons for the Orange, including seven during the 2015 season. As a junior, though, Ishmael turned just one reception into six points — a career-low. He was targeted in the red zone just 12 times last season. That is likely to change in 2017, however, and Ishmael — with an increased volume of targets — should see his touchdown numbers balloon back up.

Plus, Ishmael is certainly capable of making an impact play close to the goal-line, including this gem against Boston College last season.