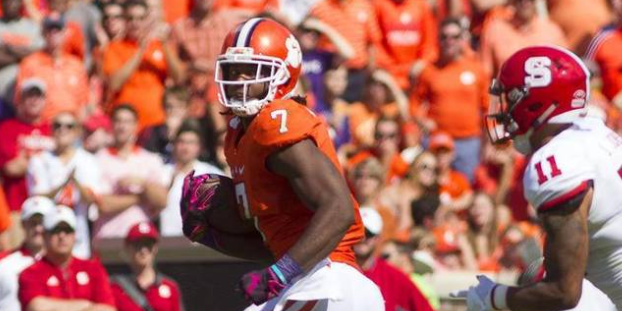 Three finalists were named last month for the Fred Biletnikoff Award — the honor handed out annually to college football’s most outstanding wide receiver. The ACC is home to some of the nation’s best pass-catchers; however, none of them were named among the final trio of contenders.

The 2016 Biletnikoff Award Finalists are: Austin Carr of Northwestern, Zay Jones of East Carolina, and Dede Westbrook of Oklahoma!

There were three ACC receivers this season who eclipsed the 1,000-yard mark through the air: Clemson’s Mike Williams, Amba Etta-Tawo of Syracuse and North Carolina’s Ryan Switzer. Lets take a look at how that trio stacked up with the other finalists. (While there are a dozen terrific wide receivers in the ACC, the Biletnikoff Award has never gone to a receiver with under 1,000 yards receiving, which is why only these three players were included.)

Etta-Tawo, a first-team All-ACC wide receiver, was the league’s breakout star. The Maryland transfer registered absurd numbers and ranked inside the top six nationally in the triple-crown receiving statistics: receptions, yards and touchdowns.

Syracuse, under first-year coach Dino Babers, played faster than just about anyone in college football; the Orange certainly weren’t shy about throwing the football. They attempted 522 passes this season, which translates to 43.5 passes per game. Their opponents averaged about 31.1 passing attempts per game — a margin of 12.4, which is sizable.

This was a bounceback season for Williams, who missed almost all of 2015 following a neck injury against Wofford. The redshirt junior returned with a vengeance this season, hooking back up with star quarterback Deshaun Watson to form one of the most prolific passing duos in the nation.

Williams was All-ACC in 2014, but this season he outpaced everything he accomplished two years back. The 6-3 wideout posted career highs in several statistics: 79 receptions, 1,114 yards and 10 touchdowns. He was one of only 31 players to haul in 10 or more touchdowns, and he has at least two more games to play.

According to Football Study Hall, Williams was targeted 111 times this season (23.4 percent of the team’s total targets), which gives him a steady catch rate of 71.2 percent. Williams was by far the best receiver on a team that ranked in the top 10 in terms of Passing S&P-plus (128.6) and Success Rate (51.5 percent).

For years, Switzer has been an integral component in North Carolina’s aerial attack. During his final frame in Chapel Hill, though, his role expanded as he became the nucleus of the passing offense.

The target numbers of East Carolina’s Zay Jones are hard to wrap one’s mind around. He averaged more than 18 targets per game. The Pirates averaged 46 attempts per game, which means that two out of every five passes went in Jones’ direction. No one is touching his counting metrics; he simply had too many targets to be matched.

Dede Westbrook of Oklahoma had himself a season. His numbers simply jump off the page. It’s clear that he and quarterback Baker Mayfield had a connection — catching 77 percent of the passes thrown your way is really impressive, especially when you consider his use in the deep passing game. Westbrook’s 15 yards per target jump off the page in this somewhat limited comparison.

All of these guys are awesome players worthy of claiming this award; there’s a strong chance all six of them are playing a Sundays a year from now. And like any award, there can be only one winner, which means there will invariably be players worthy of recognition who fall just short. It’s splitting hairs here, but it does look like the ACC could’ve received (pun) some more love when it came to this award — Etta-Tawo’s numbers are as good as anyone’s this season.