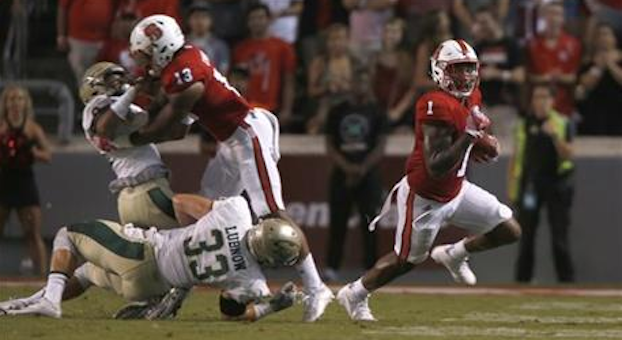 Jaylen Samuels' NFL Draft stock may never be higher than it is right now. (AP Photo).

NC State heads into its bye week with a 2-1 record. Awaiting them on the other side of this brief break: a conference schedule that includes two match-ups against top five teams — both of which will be on the road (Clemson on Oct. 15, Louisville on Oct. 22) — in the next four weeks. The Wolfpack, however, will open their conference slate in Raleigh against Wake Forest. When NC State looks for their third consecutive win against the Demon Deacons, you can — as usual — expect their offense to feature tight end Jaylen Samuels, especially as they approach the goal line.

For the second straight season, Samuels has been one of the most efficient offensive players in the ACC. In the first three games of 2016, the junior from Charlotte has scored six total touchdowns (three receiving, three rushing) on just 25 total touches. Samuels has scored a touchdown on essentially one out of every four times he’s touched the ball this season.