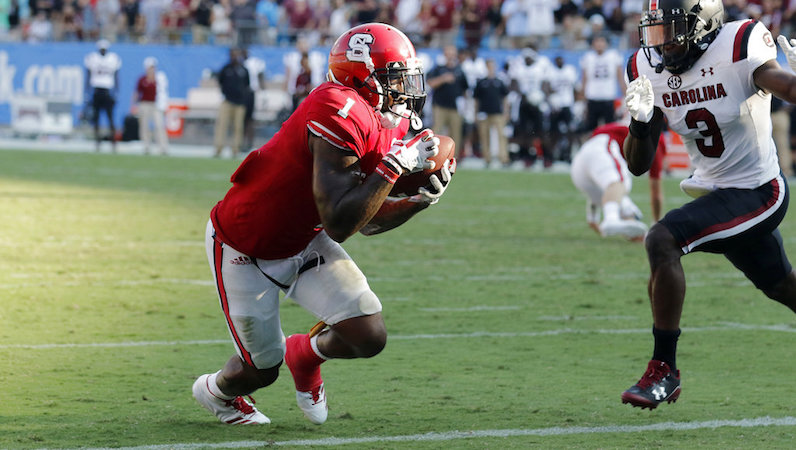 North Carolina State's Jaylen Samuels (1) controls a pass as he falls into the end zone before South Carolina's Chris Lammons (3) can defend during the second half of an NCAA football game in Charlotte, N.C., Saturday, Sept. 2, 2017. South Carolina won 35-28. (AP Photo/Bob Leverone)

Despite a domination in the box score, NC State fell in its season opener against South Carolina, 35-28. The Wolfpack outperformed the Gamecocks in a variety of metrics: total yards, first downs, time of possession — the list goes on. Ultimately, it wasn’t enough.

This was certainly a rare defeat; and if the Wolfpack had a little more success in high-leverage situations, like the deep ball Jakobi Meyers just failed to snag in the fourth quarter, then perhaps we aren’t even having this conversation.

However, there are a few things to take note of as the Wolfpack tries to move past the South Carolina loss.

This was more of a lifestyle than an offensive philosophy against South Carolina. The Wolfpack ran a school-record 99 plays — nearly twice the Gamecocks (50).

Quarterback Ryan Finley completed a school-record 45 passes for 415 yards. However, as Joe Giglio of the News & Observer displayed, the vast majority of those tosses came within nine yards of the line of scrimmage.

Finley was sharp on those short passes: 33-of-45 (73.3 percent) for 212 yards and two touchdowns. But it wasn’t enough for an offense that ranked 39th nationally in isolated points per pass play in 2016, according to Football Study Hall.

South Carolina greatly outscored NC State on possessions that went inside the 40-yard line — 7 to 4.67. Per Bill Connelly of SB Nation, teams that win the explosiveness battle (points per play) win 86 percent of the time.

Of course, other factors played a role in the Wolfpack piling up yards and finding defeat. NC State gave up a 97-yard kickoff return for a touchdown on the first play of the season. State also lost the turnover battle, and kicker Carson Wise missed the game’s lone field goal attempt.

All of that plays a role, too.

Something is better than nothing

I don’t want to label NC State’s offense production as “empty calories.” There’s nothing wrong with controlling the ball, taking what the defenses gives you and targeting your best players.

Going forward, however, it’s clear that NC State needs to find ways to be more explosive on offense. A prime example of this: the usage of Jaylen Samuels.

Jaylen Samuels is the best player on NC State’s offense, and as usual, he was heavily featured on Saturday — to no avail, though.

The always-productive Samuels hauled in 15 passes — tied for third most nationally in week one — on 16 targets, per NCAA Savant. It’s no easy feat to produce a catch rate above 90 percent, especially on that volume of targets. However, it’s made far more possible when the ball travels only so far on pass routes.

Last Saturday, Jaylen Samuels became the first Division I player since Washington’s Braxton Cleman in 2002 to record 15 or more receptions in a game, and also average under six yards per catch. Dating back to the 2000 season, they are the only two players to hit these benchmarks in the same game.

He’s obviously not a vertical threat used to stretch the field, and it’s just one game, but those numbers — 5.7 yards per catch, 5.3 yards per target — fall south of his normal levels.

As NC State gets set for Marshall, let’s see if the coaching staff finds ways to get Jaylen Samuels into space more frequently, or uses the attention he creates to spring things down field for other receivers.