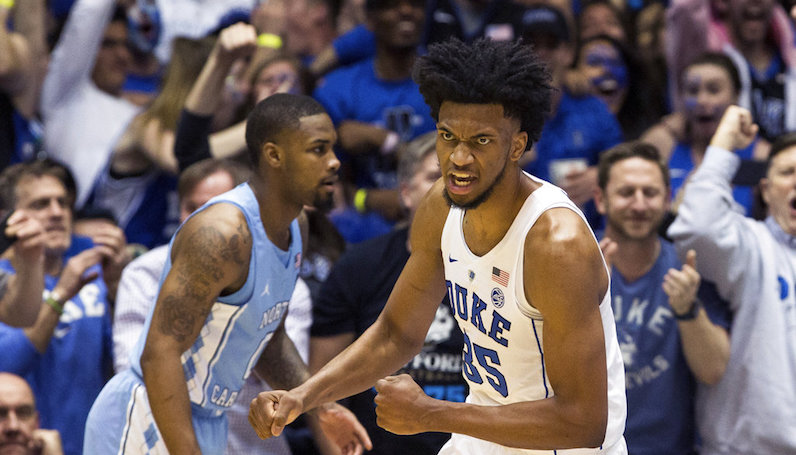 Duke’s Marvin Bagley III (35) celebrates after a dunk during the second half of an NCAA college basketball game against North Carolina in Durham, N.C., Saturday, March 3, 2018. (AP Photo/Ben McKeown)

ACCSports.com is keeping a close eye on which underclassman players around the ACC are announcing for the NBA Draft this spring.

Underclassmen must decide whether to enter their name tentatively in the NBA Draft pool by Sunday, April 22. They subsequently must decide whether or not to remove their name for draft consideration by May 30, a couple of weeks after the NBA Draft Combine. The Draft Combine is a proving ground for those prospects who are trying to fight their way into a late first round or second round selection, or those vying to raise their stock for the future.

Three of the four members of Duke’s golden quartet of 2017 freshman signees – Marvin Bagley, Trevon Duval, and Gary Trent – have announced their intentions to leave Durham and become the latest Blue Devil one-and-dones. Wendell Carter is widely projected as a likely top ten pick, but he has not yet made his final decision. Though Carter does project highly this year, he could be a potential top three pick a year from now if he returns to Duke. So he’s being patient and weighing his options.

Miami’s Lonnie Walker is also a certain one-and-done, having announced his plans to leave Miami. Louisville junior power forward Raymond Spalding has announced he’ll be staying in the draft pool as well.

Some of the ACC’s top players fall into the second category – those who are examining their status without jeopardizing their collegiate eligibility. Boston College’s standout tandem of Ky Bowman and Jerome Robinson, as well as Clemson’s Shelton Mitchell and Marcquise Reed, and Miami’s Bruce Brown and Dewan Huell, fall into this category. Multiple others could make similar decisions over the next two weeks.

These are guys who realistically project higher as NBA prospects in 2019, but have a chance in the coming weeks to play their way onto a pro roster more quickly. Louisville’s Deng Adel, N.C. State’s Omer Yurtseven, and Georgia Tech’s Josh Okogie are also considering their pro prospects while leaving the door open to return to college. Yurtseven hasn’t hired an agent, but won’t be returning to N.C. State.

Testing the Waters (Not Hiring an Agent)

No Decision Yet Made (Deadline April 22)